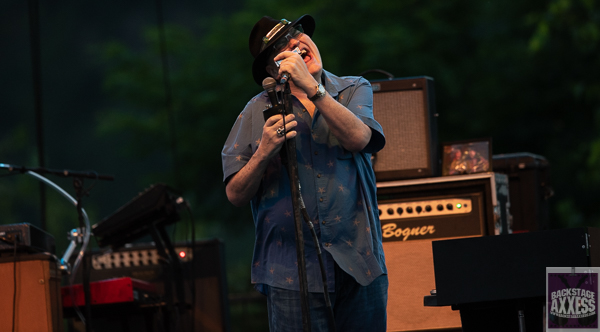 A different flavor jam band made their first evert appearance at Artpark this past Sunday night. Princetown, NJ’s finest Blues Traveler is that band. It’s hard to believe that they were really making their first ever appearance. The stage is tailored made for them.  When the band took the stage, you can tell they felt right at home. In fact, vocalist John Popper made reference to how close Canada was to them (overlooking the gorge behind the stage.) Blues Traveler still consists of original members Brendan Hill on drums and Chan Kinchla on guitar. They were accompanied by longtime bassist Tad Kinchla on bass and ben Wilson on keyboards. The band just released a covers album back in April.

The band took the stage after 8:30pm an kicked into “Stand” off of 1994’s  ‘Four’ album.  That disc is obviously known as the bands standard because it also spun their biggest hits in “Run-Around’ and “Hook.” Both were played and of course got some of the biggest reactions of the night.  Blues Traveler are much more than this album. Besides being considered a “jam band” the band is really tailored around Popper’s amazing harmonica playing. He has a variety of them and it was treat to hear him pay them throughout the night. Even though the band released a covers album, they played a few covers that are not on the standard edition. The Charlie Daniels staple “Devil Went Down to Georgia” and Tom Petty’s “Mary Jane’s Last Dance” were among the dishes served up by the band for the audience.  One other cover “Funky Bitch” originally done by (Son Seals) was also a show highlight. The band wrapped up a tight sounding set with a tribute to the recent passing of Charlie Watts of the Rolling Stones with a cool rendition of “Miss You.”

I must admit, I wasn’t exactly sure what to expect from Blues Traveler as it was my first time catching them live. They exceeded my expectations tenfold! A great live band complimented  by the sweets sounds of Poppers’ harmonica playing still makes this band a must see on your concert schedule.

Things are Looking Up

The Devil Went Down to Georgia (Charlie Daniels Band cover)

Girl Inside my Head

We would like to thank Dave Wedekindt from Artpark for the credentials to review the show.