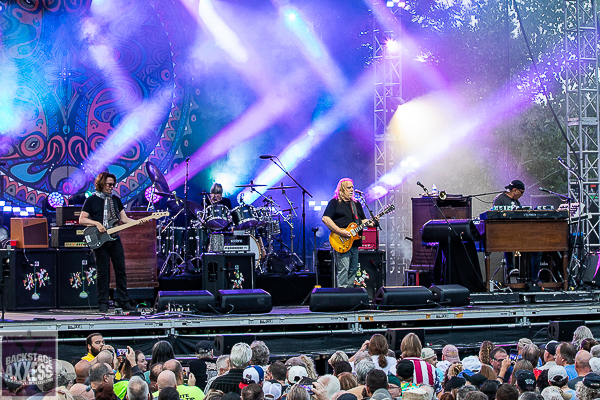 Govt Mule, led by guitarist Warren Haynes, brought their 2021 Summer Tour to Artpark in Lewiston, NY this past Tuesday night. Haynes and Mule are a non-stop touring machine that brings a different show every night to wherever they play. A former Allman Brothers guitarist, Haynes is a talented and versatile player who coaxes a hypnotic, southern rock style that has his fans moving and swaying to his guitar mastery.  As he came on stage he grabbed the microphone and shouted “We’re here to play all night!” That really got the crowds juices flowing.
Taking to the outdoor stage to the traditional “Railroad Boy,” Haynes led his 4 piece band in an extended rock ‘n roll version of the song. Next up was “Thorazine Shuffle,” a slow tempo song that has a touchy lyric about dealing with mental issues. “Banks of the Deep End” followed which pays respects to former Mule bassist, Allen Woody who died from a drug overdose. Haynes was especially fervent in his solo playing on this song. Next up was “Game Face” which has Haynes in top form, inserting a snippet of “Mountain Jam” from his former band The Allman Brothers in the middle of the song.
Threatening skies didn’t discourage the band from continuing with “Captured,” a beautiful tribute written to one’s special love. Haynes really picked up the intensity in this song, leading guitar runs with a mix of facial expressions as he soloed. “Revolution come, Revolution Go” was up next and the extended playing continued. The set time was now past two hours and the band had played six songs. The last song in the first set was the live concert favorite “Mule,” a protest song about the “man” in charge. This band namesake song has a special place in the hearts of Mule fans and they showed it in their response. The singing and dancing was evident throughout the venue even as rain started to fall. The band finished the song as the rain rolled in and ultimately shortened the show and left everyone seeking shelter. Even with half the night missing, Govt Mule left a lasting impression on their loyal fans.