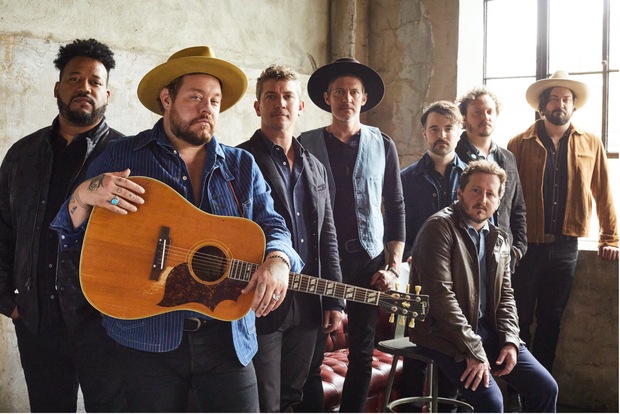 September 24, 2021—“Love Don’t,” the new track from Nathaniel Rateliff & The Night Sweats, premieres today. The song is latest to be revealed from the band’s third studio album, The Future, set for release on November 5 via Stax Records. Listen to/share “Love Don’t” HERE.
Following its release in August, the band’s knockout single “Survivor” moved quickly into the #1 slot at Triple A and debuted Top 30 on the Alternative Chart. The song is also #2 on the Americana Singles Chart while The Future remains #1 on the Non-Comm Albums Chart for the second consecutive week. Listen to “Survivor” HERE and watch the accompanying video HERE, featuring professional boxer Prince Charles Martin, the former IBF Heavyweight Champion of The World.
The new music caps off a run of career milestones for Rateliff and the band, including a debut on “Saturday Night Live” featuring the premiere performance of “Redemption,” written and featured in the film Palmer starring Justin Timberlake, as well as an appearance on “CMT Crossroads” with country singer/songwriter Margo Price. Rateliff’s “Tiny Desk (Home) Concert” recently premiered at NPR Music, as well.
For The Future, Rateliff and The Night Sweats escaped to his new Colorado studio to write an album’s worth of songs, shedding light on their unique observations and songwriting reflecting on our current times. While recognizable, the new work has evolved and pushes the band to a new level.
“I look at the album overall as a big question,” notes Rateliff. “When I was writing the record we were in the middle of a pandemic and our future looked pretty bleak. I just continue to try to write from a place of hope. Then my own neurosis, and maybe being a libra gets in the way, and I can’t make up my mind. There is this constant back and forth battle in me personally and I am sure that comes out in my writing.”
Recorded at Rateliff’s own Broken Creek Studio outside of Denver, The Future was produced by Bradley Cook (Bon Iver, Kevin Morby, The War on Drugs) and R.M.B.—the production trio of Rateliff, Patrick Meese (The Night Sweats) and James Barone (Beach House)—who were the team behind Rateliff’s acclaimed 2020 solo album And It’s Still Alright. Additional production was added by musician, engineer and producer Elijah Thompson (Father John Misty, Richard Swift) while Jenny Lewis, Jess Wolfe (Lucius) and Amelia Meath (Sylvan Esso) contributed backing vocals.
Nathaniel Rateliff & The Night Sweats are Rateliff (vocals, guitar), Joseph Pope III (bass), Meese (drums, percussion, keys), Luke Mossman (guitar), Mark Shusterman (organ, keys), Andreas Wild (saxophone), Daniel Hardaway (trumpet) and Jeff Dazey (saxophone).
The band’s self-titled debut album was a breakout success. Now certified Gold in the U.S., it has sold over a million records worldwide. Their sophomore album Tearing at the Seams debuted in March 2018 to widespread critical acclaim and included three singles which hit #1 at Triple A Radio. Last year, Rateliff released his first solo album in seven years, And It’s Still Alright, via Stax Records. It peaked at #3 on iTunes’ “Top Albums” chart, debuted at #1 on Billboard’s “Americana/Folk” chart, landed at #2 on their “Current Rock” chart and resided at #1 on the Americana Albums Chart for eight consecutive weeks. Earlier this year, Rateliff released a new live album, Red Rocks 2020, which was recorded in an empty Red Rocks Amphitheatre during Rateliff’s mid-September run of socially distanced shows.
NATHANIEL RATELIFF & THE NIGHT SWEATS
THE FUTURE
1. The Future
2. Survivor
3. Face Down In The Moment
4. Something Ain’t Right
5. Love Me Till I’m Gone
6. Baby I Got Your Number
7. What If I
8. I’m On Your Side
9. So Put Out
10. Oh, I
11. Love Don’t