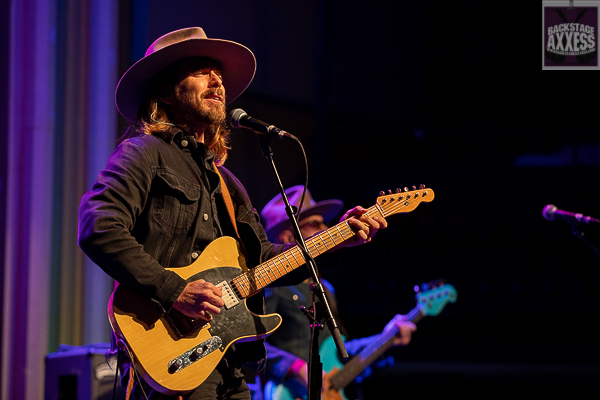 Lukas Nelson and the Promise of the Real brought their tour to Asbury Hall in Buffalo NY last Wednesday in support of their latest album, “A Few Stars Apart.” Nelson had been off the road for most of 2020 and is making up for lost time. Since its formation in 2008, Nelson and the POTR have toured regularly, recorded seven albums and collaborated with dad Willie, Neil Young and won a Grammy for the “A Star is Born” soundtrack.

Opening with “Start to Go,” Nelson led the band in a upbeat tune with the audience shuffling tight to the stage and kickin’ up their heels in rhythm. The dancing continued for the next few songs including fan favorite “Austin.” Nelson took a seat at the piano to belt out the title track to “A Few Stars Apart.”  Nelson’s appeal is growing with each project he undertakes.  Creative songwriting and magnetic stage presence have put him in the enviable position of being a young veteran with an expanding popularity. Up next was his torchy version of “Georgia.” That is not the popular Ray Charles version, but an ode to a woman he would like to forget. It’s one of those songs that feels like you have heard it many times upon first listen. Many of Nelson’s songs are like that. They sound familiar right away. As the band played on, the crowd continued to move to the rhythm and beat the band provided.
Nelson responded with a six-song encore that finished with the popular “Something Real.” As the group gathered at center stage for their final bow, the crowd did not let them go easily. In the previous two and a half hours, they were taken on a trip through some of the best music being played today. Nelson is that good. If this group takes the road to your town, jump on the wagon. It will be a great ride.

We would like to thank Catherine Snead from Sacks & Co. for the credentials to review the show.