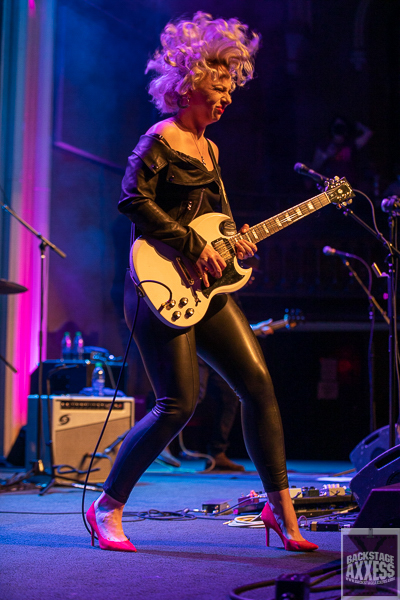 Samantha Fish brought her latest tour to Asbury Hall in Buffalo, NY last week in support of her new album “Faster” on Rounder Records. Fish is a frequent visitor to the area and has a loyal following. Due to this the show was sold out. The anticipation was high as Jonathan Long opened the night with a hot acoustic set. Long is a fantastic guitarist who has many awards and plays his heart out onstage. He was very well received.
Fish took the stage and blazed through the first three songs, all from “Faster.” The songs have a new direction for Fish, not as bluesy, but more of a rock n’ roll flavor. She commanded the stage all night long, directing her band while shredding on the guitar. Her blonde hair was flying all over as she jammed on solo after solo. Mixing in some of her older catalog like “Hello Stranger” and “Bulletproof,” she satisfied her older fans but it was the music of “Faster” that ruled the night. Fish has forged into new territory and has planted her stake. She has looked for new ground on her latest record but has not forgotten her blues roots.
As the night closed, the encore was a rousing version of “Bitch on the Run” with her trading licks with the opener Long, They were like two boxers in the ring going back and forth trading punches.  It was a memorable moment. Fish continues to grow a new fanbase while wetting the appetite of her old fan base. The new song “Loud” off of ‘Faster’ has a line: “We’re far away from the good ol’ days.” I would say that about tells the story of the new Samantha Fish.
Setlist:
Loud
All Ice No Whiskey
Twisted Ambition
Hello Stranger
No Angels
Crowd Control
Wild Heart
Better Be Lonely
Kill or Be Kind
Watch It Die
Either Way I Lose
Black Wind Howlin
Dream Girl
Bulletproof
Encore:
Bitch On The Run (With Jonathan Long)
We would like to thank Patti deVries from Devious Planet for the credentials to review the show.