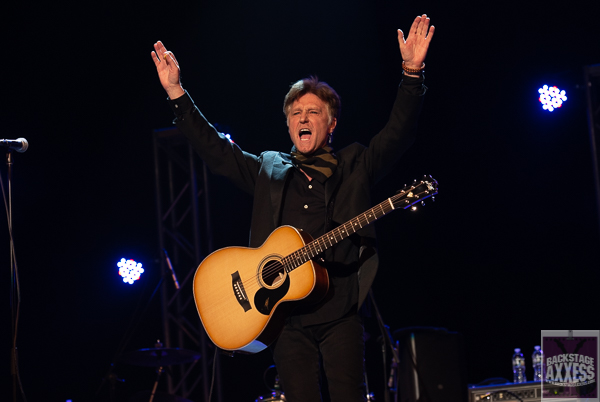 There isn’t much that vocalist John Waite hasn’t seen or done. Waite has fronted rock bands The Baby’s and Bad English while (and still) maintaining a very strong solo career. He just released ‘Wooden Heart Acoustic Anthology Series’ back in March. Waite still remains active and vital in rock music. He is in the midst of a 39 city tour that started in summer. Waite played his second last show at the Riviera Theater this past Saturday night.

Taking the stage initially was just Waite and his guitar player Mark Ricciardi, as they went through four acoustics numbers. One of those numbers was the biggest hit Bad English ever had in “When I See You Smile.” The evening was a part storytellers sort of show as well. Waite talked about how he either came to perform certain songs or write them, as was the case in “Bluebird Cafe.” It was about his time spent in NYC in the mid 1990’s. Bassist Tim Hogan and drummer Alan Childs joined them to finish off “Downtown.”  Waite did a great job mixing up the setlist. It had a really nice flow to it as there were no peaks or valleys at all. The most important part of the night was Waite’ voice. It was just as you would remember it. He sounds just as he did as he was on the top of the Billboard 100 charts with “Missing You.” For all The Baby’s fans out there, the popular “Back on my Feet Again” and “Headfirst” were also included in the set. The last song before the encore was another on of Waite’s big hits in “Change.” He and his band closed out the night with a medley of both Led Zeppelin’s “Whole Lotta Love” and the Jeff Beck Group’s “Let Them Love You.”

The Riviera was the perfect setting for Waite and his band to flourish. Waite’s vocals, his seasoned backing band and the Riviera’s acoustics were the perfect match. What a great start to get ready for the Christmas season!

All Along the Watchtower (Bob Dylan cover)

When I See You Smile (Bad English song)

Back on my Feet Again (The Baby’s song)

Best of What I Got (Bad English song)

Whenever You Come Around (Vince Gill cover)

We would like to thank Dave Fillenwarth from the Riviera Theater for the credentials to review the show.