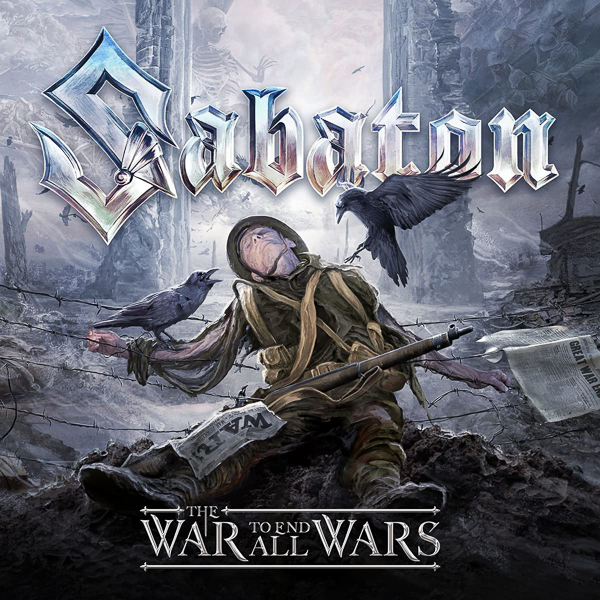 For the last two decades, the Swedish heavy metal band Sabaton has earned a legion of fans with their special style of metal. With concept albums that focus on historic wars, the band serves up powerful anthems that are both majestic and glorious alongside a barrage of frenzied guitars and pounding rhythms. For their soon to be released tenth album “The War To End All Wars,” Sabaton delves deep into tackling not only the atrocities of war but also those miraculous moments as they weave tales of bravery, victory, and the struggles of humanity.

The album opens with a combination of spoken word and huge choruses in “Sarajevo.” As we encounter “a shot that would change the world” as the assassination of Archduke Ferdinand led to a declaration of war that would encompass the continent of Europe. A lightning blast of guitars from Chris Rorland and Tommy Johansson take things up a notch as Sabaton storms the frontlines with “Stormtroopers.” You can hear the sound of waves crashing as a volley of drums from Hanes Van Dahl brings the battleships alive in “Dreadnought.”

Joakim Broden’s unmistakable vocals are front and center on “The Unkillable Soldier” and especially on “Soldiers of Heaven” which tells the story of the White War on the Alpine front and the brutal winter conditions that left many to perish. The musicianship on this record is outstanding with the driving  basslines of Par Sundstrom and the thundering drums of Van Dahl that often mimic the marching of troops into battle. “Hellfighters” is a furious ride through the guitar wizardry of Rorland and Johansson whether they are crunching a hard-hitting riff or letting everything fly in a soaring solo. Broden’s storytelling skills are second to none on “Race To the Sea” and “Lady of the Dark.” The anthemic “The Valley of Death” brings us to an incredible climax before the tide turns and we are treated to a war story of a very different kind. “Christmas Truce” takes us back in time to Christmas Eve 1914 when British soldiers overheard German troops singing carols. The song opens with the sounds of bells and has a distinct orchestral feel as we witness this Christmas miracle of a temporary truce through the musical spirit of Sabaton. Closing out the album much like it began with “Versailles.” The song is celebratory as the war has finally come to an end but a voice issues a stark warning that all is not as it seems and war will return sooner than we think.

“The War To End All Wars” is another massive album done as only Sabaton can proving them once again to be modern masters of historic metal. In today’s heated geo-political climate, perhaps world leaders should forgo the summits and sanctions and sit down and listen to this album. It would serve them well to listen and remember that what has once happened need not happen again. For the rest of us, we can simply sit back and enjoy another epic offering from the Swedish metal machine Sabaton.