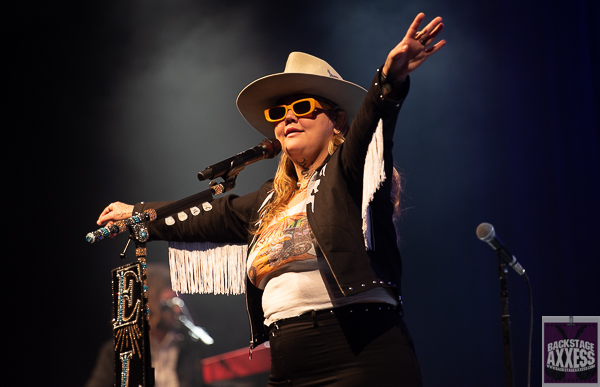 Elle King made her first headlining appearance in the WNY are this past Friday night at the Seneca Niagara Casino. She also is currently on her first solo tour called the ‘Drunk And I Don’t Wanna Go Home Tour.’ The multi instrumentalist you can say is a mix between rock, country and blues. She brought her band The Brethren with her as well. This was my first time ever seeing her live and I didn’t know what to expect.

King and her band took the stage at about 8:05pm and went into playing a track she has been playing since her early days called “Good for Nothing Woman.” King was all smiles and seemed in a great mood. She even joked about why people would go over the falls in barrel. She was playfully even taking a collection to try to convince her bass player to do it. King went back and forth all night switching instruments around. She played the banjo, acoustic and electric guitars. She shared a few stories including how when she was a little girl in school that she was asked what she wanted to do when she grew up. When she responded  “A singer,” the teacher laughed it off. She then proceeded to give the finger to her and said I wonder what she is doing now?  King showed off her voice on “I Feel Like Breaking Up Someone’s Home” as she held one of the notes for a bit. After performing her big hit “Ex’s & Oh’s,” she took a woman’s phone and proceeded to have a FaceTime chat with a young kind. It was a cute moment. Her guitar player player Joey played the part of Tom Petty in “Stop Dragging my Heart Around.” Its really hard to classify her to any genre as she truly combines so many different musical elements and makes it her own. There are few artists that sound like her and that’s a good thing. It’s been 2 years since King release new music (an EP) and it’s been almost 4 years since she released a full length LP.  With a great backing band in the Brethren in tow, I feel it won’t be much longer till we see and hear some more King style music coming your way.

It was solid performance put on by King and her band.  As I stated earlier, I didn’t know what to expect but I came away from her show wanting more. If an artist makes that mark on you, then they truly did their job!

Good for Nothing Woman

You’re the Reason I drink

Good to be a Man

We would like to thank Phil Pantano for the credentials to review the show.