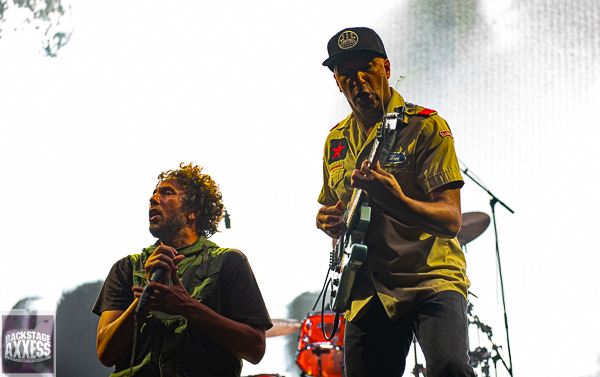 After years of speculation, Rage Against the Machine finally decided it was time to tour. It’s been 11 years since they done any live shows and 22 years since they done a proper full-scale tour. Buffalo was one of the stops on the 9-month tour that will span a total of 40 cities that includes 51 shows. It’s been almost 2 and half years since the tickets for this show went on sale. A pandemic and two postponements later, the band finally made its way to the Queen City. The tour was dubbed as the “Public Service Announcement” tour and included all original members of the band; vocalist Zack de la Rocha, guitarist Tom Morello, drummer Brad Wilk and bassist Tim Commerford. In speaking with fellow concertgoers, this could be the most highly anticipated show that I can ever recall.

As the band took the stage, de la Rocha was carried by two security men to a seat center stage. Unfortunately, during the 2nd show of the tour, he injured his leg and is now unable to move. Instead of postponing dates yet again, de la Rocha is being diligent to carry on with the rest of the tour. Once he was properly positioned, he immediately stated “This is a public service announcement, we are Rage Against the Machine and we are from Los Angeles, California.” The band then went into “Bombtrack” which was an appropriate opener as it energized the crowd. That energy didn’t dissipate until the band exited the stage and hour and half later. A massive screen behind the stage captured every moment that all 4 made throughout the show. Even though seated, de la Rocha’s energy didn’t change, he shook, head banged and did whatever he could throughout the set to add to the powerful lyrical content he was delivering.

A guitarist who doesn’t get his just due is Tom Morello. His playing and effects on tracks like “People of the Sun” and “Testify” shows why he is not only one of the best guitarists to come out of the 90’s, but one of the best guitar players period! He even added flare by playing parts of “Bullet in the Head” with his teeth. This machine doesn’t go without the rhythm section that both Wilk and Commerford provide. The tandem kept that beat going forcefully but consistently throughout the show.

Opening rap duo Run the Jewels came out and delivered a high energy take on their song “Close Your Eyes (And Count to Fu*k)” with the band. Morello occasionally fills in for Bruce Springsteen and the band did their take on “The Ghost of Tom Joad.” It seemed like the crescendo of energy that crowd built up exploded for the bands last song “Killing in the Name.” That also included a huge mosh pit that encompassed a good portion of the front floor, which was all general admission seating.

If this was one of the most highly anticipated shows it surely didn’t disappoint. The band left everything out on the stage. One of the most politically charged bands are even more relevant today than they were when the music was originally crafted, I do believe.  Go to the band’s website and see where they are playing because it’s a show you don’t want to miss.

People of the Sun

Bullet in the Head

Take the Power Back

Close Your Eyes (and Count to Fu*k) (Run the Jewels Cover with them joining R.A.T.M. onstage)

Sleep Now in the Fire

War Within a Breath

Killing in the Name