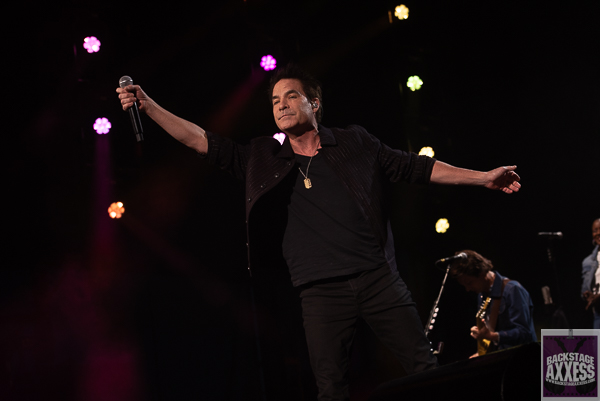 The whose who of 90’s and early 2000’s rock graced the Darien Lake stage this past Saturday night. Train accompanied by Jewel, Blues Traveler and newcomer Will Anderson gave the audience a mix of some new tunes along with vivid memories of yesteryear for over 4 and half hours.

First up was newcomer Will Anderson., With just an acoustic guitar on hand, he was there to basically get the juices flowing. It was quick 4 song set but I believe Anderson made the most out of his time on the big stage.

Until last August I believe I never seen Blues Traveler. Now this is the 2nd time within a year that I get to take in one of the more enjoyable bands to see live. Even though they played only 5 songs, they did some extensions out of some of them, and the entire set lasted approximately 35 minutes. They threw most for a loop when they opened up with the Sublime cover “What I Got.” The band sounded extremely tight though. There are few (if any) that work a harmonica like John Popper. That talent was on full display even if briefly.  They closed their set with the fan favorite “Hook.”

Next up was Jewel. She just released her 13th studio effort on her own label called ‘Freewheelin’ Woman.’ Taking the stage Jewel was dressed in long jeans and a big rimmed black cowboy hat. She had lots of turquoise jewelry that matched the color of her eye makeup.  You can say she was dressed to the T. The 50-minute set consisted mostly of her classic songs with a few new ones sprinkled in for good measure.  In the past, I don’t believe I seen Jewel play an electric guitar. She did so predominantly for this show. All of her new songs flowed very well into her set. For “You Were Meant for Me,” it was nice family affair as she brought out her son Kase to play drums (with brushes). It gave the song extra meaning to have him up there for Jewel I’m sure. She talked about how she owes everything to her breakthrough hit “Who Will Save Your Soul.”  What I’m taking away from her performance is how she can still hit every note (low of high) with relative ease. Of course, what is a Jewel show without her showing her roots of Yodeling. Still amazes me every time I get to see her do it. It’s almost like an 8th wonder of the world. A solid set that everyone should get there early enough to see.

Train took the stage a little after 9pm and opened with the title track to their latest effort called “AM Gold.” A great show opener and it seemed to rev up the crowd for the rest of the set. Something I never saw before is that vocalist Pat Monahan had people toss up their cell phones (one at a time) and take selfies with them on stage during “Meet Virginia.” There was not a lull at this show whatever so ever. Between the confetti canons going off, t-shirts being thrown, inflatables being tossed into the crowd and covers being done with the other vocalists, this set had everything! Jewel joined the band for the Train song “Turn the Radio Up” and the covers “Dancing Queen” and “Listen to the Music.” John Popper joined for the Train song “Bruises” and the cover “Love the One You’re With.” All of these were just so much fun to witness. Monahan enjoyed a solo spotlight for “Its Everything” where it was just him and his trusty acoustic guitar. Then the entire band came forth for the beginning of “Calling All Angels.” If you weren’t sure on Monahan’s vocals, watch him perform “When I Look into the Sky.” You can not only hear but feel how powerful his voice is. To back that up when he hit the notes on “Dream On,” that should’ve’ stamped everyone’s approval that Monahan has one of the underrated rock voices out on the circuit today. The band closed with (what I feel) is one of the best songs ever written in “Drops of Jupiter.” The headliners had lot to live up to before taking the stage. Was the band up to the task? They were tenfold!

Surprisingly with this amount of talent on stage, the show only drew around 5,500.  Regardless of those numbers, all the bands delivered on many different levels. I would say up until now this might be my show of the year. A very impressive bill not to be missed as you still have a chance to check it out.

What I Got (Sublime cover)

Ode from the Aspect

Love Me, Just Leave Me Alone

You Were Meant for Me

Who Will Save Your Soul

Running Back (Trying to Talk to You)

Save Me, San Francisco

Turn Up the Radio (with Jewel)

When I Look to the Sky

We would like to thank Gabi Hollander from Full Coverage PR and Morgan Nicholson from Livenation for the credentials to review the show.