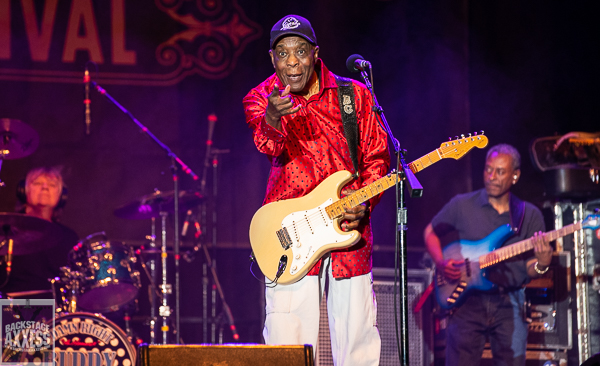 The first annual KWS Backroads Blues Festival made its was to the gem of Lewiston, NY in Artpark. It was the first appearance to Artpark for both Kenny Wayne Shepherd and Cristone “Kingfish” Ingram. Buddy Guy has made several appearances over the years with the last one being in 2013.  With a trio like this many fans were eager to see what the best of blues had to offer.  A crowd of close to 4,500 made their way to Artpark to take the show in.

First up was Grammy nominated Kingfish Ingram. At age 23, Ingram has created quite abuzz about himself. He has already toured with Buddy Guy and Vampire Weekend to name a few. The hour set contained only 7 tracks but Ingram made the most out of his time. His playing and tone reminds me so much of B.B. King. Just how every note was premeditated. He nailed it on “Empty Promises.” The song had both a slow tempo and it picked up towards the end of the song. I feel that the world is Ingram’s oyster and let’s see if he is indeed the next blues guitar great to lead the next generation of blues guitar players.

Up next was the mastermind of the entire festival in Kenny Wayne Shepherd. The band is currently out on tour celebrating the 25th anniversary of their landmark album “Trouble Is…’ My take on KWS is that he has always been one of the most underrated guitar players on the planet.  His playing is extraordinary and at Artaprk was no different. The hour and15 minute set contained his masterful licks ladened with the soulful vocals of Noah Hunt. Noah dabbled with the guitar also on various tracks including “I Want You,” in which KWS took lead vocals on. “Heat of the Sun” was one of the highlights as this truly showed the brilliance of KWS’ playing. It also showed the complimentary playing of legendary drummer Chris “Whipper” Layton along with bassist Troy Franklin and keyboardist Riley Osburn. Of course, the most notable tune of the evening was the hit single “Blue on Black.” The band’s rendition was stellar and it made for an overall amazing set put forth by the KWS Band.

The headliner was legendary blues guitarist and icon Buddy Guy. At 86 years old, Guy’s approach to the show is somewhat different than it used to be. Always a showman, Guy is more apt to sharing personal stories with the music as more of the background piece. Guy can still deliver on the 6th string as evident by the opening track “Damn Right, I’ve Got the Blues.” Guy provided some tricks (as he normally does) as he payed some chords with his shift and took a drumstick and played a few chords during the Cream cover “Sunshine of Your Love.” Both KWS and Kingfish joined Guy to close out with a impromptu jam on the Cream classic “Strange Brew.”

This inaugural Backroads Blues Festival only has 6 dates on the schedule. Artpark was one of the lucky 6. The plan is to do more as we talked to KWS last month (go here is you want to here it: Interview ). The WNY area were lucky to witness 3 generations of blues greats and lest hope this is a mainstay for years to come.

Damn Right, I’ve Got the Blues

How Blue Can You Get?

I Just Want to Make Love to You (Willie Dixon cover)

Sunshine of Your Love (Cream snippet)

Take Me to the River (Al Green cover)

Everything is Broken (Bob Dylan cover)

Heat of the Sun

She Calls Me Kingfish

Another Life Goes By

Too Young to Remember

Your Time is Gonna Come