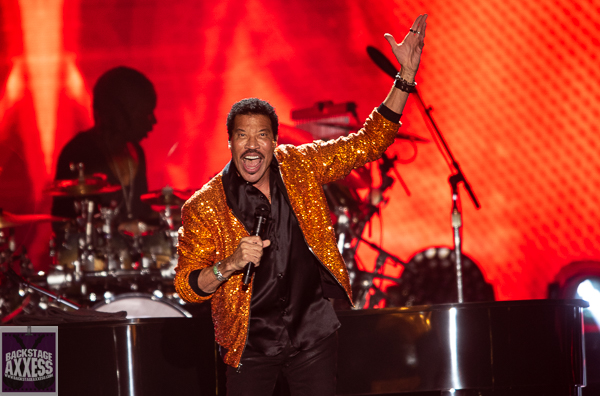 It’s been 22 long years but newly minted Rock  and Roll Hall of Famer Lionel Richie finally made his way back to the WNY area this past Friday night. He is currently on his Hello tour that originally started back in 2019. The pandemic delayed it from continuing on. Earlier in the spring, it was announced that Lionel Richie would be one of the headlining shows at the Seneca Niagara Casino making it one of the hottest tickets of the summer to get. The show was sold out with the Casino stating it was the largest crowd they ever had for a show.  Unfortunately, the show started late as Richie’s flight from New York was delayed where the show was pushed back an hour and half.

Before Richie took to the stage, there was 10 second countdown to let everyone know that the show was about to happen. As an overture by the 5 piece band played, photos throughout Richie’s career were depicted across the video screen backdrop. Richie finally appeared to everyone’s delight as he and the band went into “Running With the Night.” The singer even donned a orange satin jacket that had those same words as the title of the song on the back of it. Richie was all smiles the entire night. Why wouldn’t he not be? The crowd was hanging on every word he sang and and spoke in between songs. After describing his less than ideal tardiness, Richie poked fun at the New York airport and apologized to the crowd. What separates Richie from most every other performer is that really knows how to work a crowd. He had some banter with a few selected members of the audience throughout. The way he comes off is so likeable. Another word that I think that can aptly describe Richie is professional.

The song preferences was perfect. He was able to balance his solo material with a slew of selections from his Commodores days. The crowd never wavered or waned even during when the ballads were played. You had places on the sides of the 200 level that the crowd used to dance to upbeat songs like “Lady” or the ballads like “Three Times a Lady.” He got a rouse out of the crowd before the song “Endless Love” was played.  He built it up like wouldn’t it be nice that  a special guest would join us for this song. He built it up like Diana Ross would join him before he then announcing, well unfortunately tonight isn’t that night. It was quite comical. He then wanted the ladies to sing her parts, in which they overwhelmingly did. They added some pyro during the breakdown of “Brickhouse” as the band interjected the Ohio Players “Fire” into it. A cool element added to the show.

The most important message of the night was what Richie said before the band played “We Are the World.” He stated “I blink I can see the world. I blink, I’m in Germany. I blink I’m in Japan. I blink I’m in Atlanta, etc. At the beginning of the show, I asked you to get to know the neighbor and say hello to them. It’s not about a political party or race. This is god’s great big family. This is going to be the greatest family reunion in the world.” The band then proceeded to go into one of the biggest selling singles of all time in “We Are the World. Richie co-wrote the song with Michael Jackson. What an amazing feeling transpired over the crowd during the song.

The only negative about this was I thought the vocals were somewhat low in the mix at the beginning of the show. The vocals did get better as the show went on. Richie is dynamic performer and the way he works a crowd is magical. It’s been way too long that the area had to wait for his presence to be felt. Hopefully, it will not be anywhere as long that the area will have to wait again.

Running With the Night

Lady (You Bring Me Up) (Commodores song)

Just to be Close to You (Commodores song)

Say You, Say Me

We Are the World (USA for Africa cover)

We would like to thank Phil Pantano for the credentials to review the show.