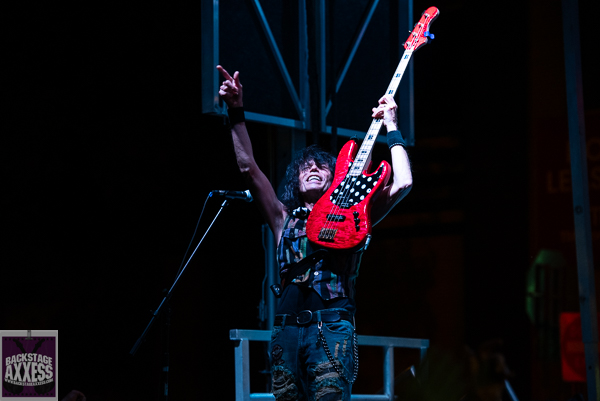 The new concert series in Niagara Falls, NY called Thursday on third wrapped up its inaugural season with a bang. A metal bang you can say. Quiet Riot lead their way having kids bang their heads as the band reached number one on the Billboards charts with the first metal record back in 1983. With the passing of both founding members Kevin DuBrow and drummer Frankie Banalli, the current version of the band is quite different than it was back then. The only remaining member from that time period was bassist extraordinaire Rudy Sarzo. Sarzo just rejoined the band at the beginning of this year. Rounding out the 2022 version includes  Jizzy Pearl on vocals, Alex Grossi on guitar and Johnny Kelly on drums.

Taking the stage at about 8:30pm, the band immediately dipped into their 6 time platinum record ‘Metal Health’ with  “Run for Cover.” In fact, when you have a record like that in the arsenal, the band would go back to that multiple times throughout their set. The solid playing by Grossi and Kelly allowed the showman Sarzo and Pearl to do their things. Sarzo was all over the place while pounding and moving the bass all around his body. Pearl did what a front man was supposed to do. He held the crowds interest while delivering a great vocal performance.  Besides all the Quiet Riot classics like “Slick Black Cadillac” and “The Wild and the Young,” the band added also added the a tune from Pearl’s old band Love/Hate in “Blackout in the Red Room.” Of course everyone sang along to the hits “”Cum on Feel the Noize” and “Metal Health.” No one went away disappointed as all the hits were all played.

I felt the falls crowd were appreciative that a band like Quiet Riot were playing in their town. The band might not be climbing the charts like they once did, but they have solid band of musicians who are still delivering a quality product. They are defiantly worth catching if they come to a town near you!

The Wild and the Young/Bass solo