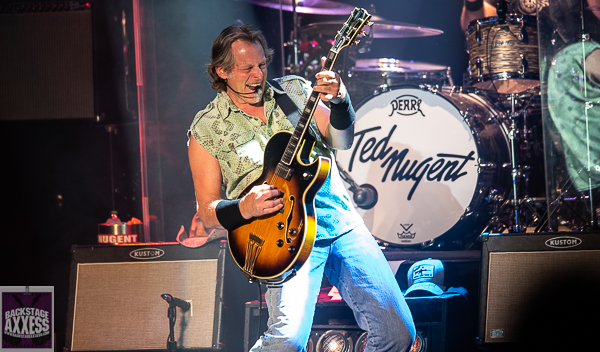 Delayed over 2 years due to the pandemic, the Motor City Madman Ted Nugent finally made his way to the beautiful Riviera Theatre in North Tonawanda, NY for 2 back-to-back sold out shows. It’s been about 9 years since I last saw Nugent and was looking forward to seeing him again. He currently just released his 16th studio album title ‘Detroit Muscle.’ I was curious on what songs he would play off of the new disc without comprising some of the classics he would have to play. He is back to paying with a 3 piece which includes longtime bassist Greg Smith and Jason Hartless who joined the Nugent band on drums back in 2016.

Right out of the gate Nugent played the “Star Spangled Banner.” Not only does it come from ‘Detroit Muscle,’ but it set the patriotic theme that Nugent portrayed all night. Patriotic to both his county and his music you could say. Nugent only dipped into ‘Detroit Muscle’ one other time playing “Come and Take It.” Another Nugent hard driving riff-oriented track. Even though Derek St. Holmes (on and off guitarist and vocalist) was missed, I do have to say that Smith’s vocals held up quite well on the songs that St. Holmes usually would sing lead on (Stromtroopin’, Need You Bad, Hey Baby and Stranglehold).  The song selection was perfect. It blended in some new tracks with his hits and some lesser-known tracks tossed in to wet the appetite for his diehard fans as well.

According to Nugent, he stated that this show at the Riviera Theatre was his 6,822 performance. That is an impressive stat. That certainly is an insane number of shows. What I took out of this show was Nugent’s ability to still be able to continue to master the 6 string. His tone and playing were spot on. Putting politics and Nugent’s beliefs aside, (which sometimes is tough to do as they were also on display this past Monday), he is musically still on top of his game. Nugent quipped during the set that he is 74 years old and he his is still playing to make good people happy. I think he accompanied that feat on Monday night.  The only other issue I may have had was the sound was probably louder than it needed to be. Thank God for ear plugs!

If you’re planning on attending a future show, some advice… wear earplugs!

Come and Take It

Good Friends and a Bottle of Wine

We would like to thank Linda Peterson from Ted Nugent’s Management team and Dave Fillenwarth from the Riviera Theatre for the credentials to review the show.