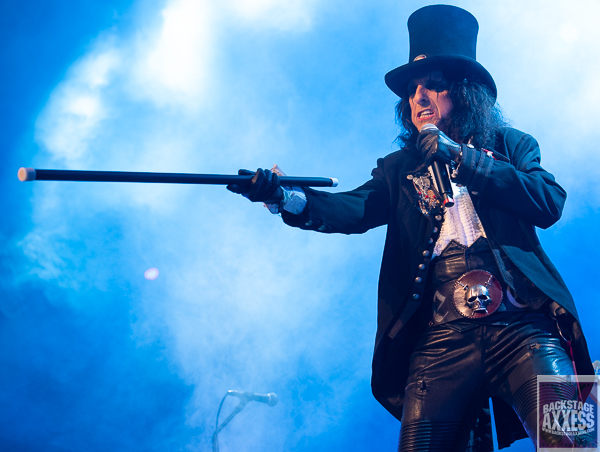 Legendary shock rocker Alice Cooper played before a nearly sold-out crowd at Shea’s PAC this past Tuesday night. This was his first appearance in Buffalo since 2015 when he opened the show for Motley Crue at the KeyBank Center. Lots have been going on with Cooper since that time. He released a terrific album called ‘Detroit Muscle.’ Also, his guitar player Nita Strauss left in the early summer to join pop sensation Demi Lovato. He replaced her with former Cooper band guitarist Kane Roberts. You may remember Roberts for his participation in the ‘Constrictor’ and ‘Raise Your Fist and Yell’ albums back in 1986 and 1987 respectively. So, it’s been well over 30 years since he has played with Cooper so I was excited to see what he can bring back to the band. The rest of the Cooper band has been there for quite a few years now. They include Glen Sobel on drums, Ryan Roxie and Tommy Henriksen on guitar, and Chuck Garric on bass.

The opener was one of my favorite Cooper tracks in “Feed my Frankenstein.” A great opener that included an appearance by a huge walking Frankenstein. Cooper showed his harmonica prowess on “Fallen in Love.” I was glad to see that “House of Fire” made it back into the setlist. “He’s Back (The Man Behind the Mask)” included an appearance by Jason from Friday the 13th. Many parts of Cooper’s stage show ties into a theme. A big walking baby sporting traditional Alice Cooper makeup busted out of a makeshift cell to walk around during “Billion Dollar Babies.” Cooper went through an array of costume changes that included multiple jackets, top hats and of course the infamous straitjacket. The jacket was used during “Steven” and “Dead Babies” which also brought out the guillotine. A perfect segue into the next song “Escape” was when Cooper reappeared and ditched the straitjacket. Alice Cooper’s wife Sheryl still plays the part of the jaded lover and still commands the stage every time she graces it. The band ended with a terrific rendition of “School’s Out,” in which balloons appeared amidst a constant spray of smoke bubbles.

The well-oiled machine that is the Cooper band had to take on a new piece and function as it was in the past. In my opinion, Roberts playing was really good, but you can tell he was still trying to get his feet wet within the perfectly choreographed show that Cooper presents. That will hopefully come in time.  Cooper’s voice remains as solid as ever. When it comes to life sayings, I always say you can count on 3 things: death, taxes, and a solid Alice Cooper show. The performance in Buffalo on Tuesday night still conveys that message.

Earlier in the day, Cooper and his longtime manager Shep Gordon made an appearance at the Center for the Arts at the University at Buffalo for a question and answering session. The event was well attended with over 300 fans. Gordon’s ties to UB run over 50 years as he graduated in 1969 with a Bachelor of Arts degree.  The session was moderated by 2 individuals from the University. With a history that runs over 53 years, what is amazing that they never formally signed a contract. They both have a deep trust in one another that it never even needed to ever be discussed. They talked about how their paths crossed, how Gordon got to sell the band at a time when flowers and hippies ruled the day. They also talked about how interactions with Jimi Hendrix, Salvadore Dali and The Muppets came into play and told various other stories that the crowd found interesting. The talk lasted for about an hour. Due to time constraints, only 3 people got to ask questions. Both gentlemen signed a few autographs before exiting the stage.

He’s Back (The Man Behind the Mask)

I Love the Dead (Band only)

We would like to thank Amy Sciarretto from Atom Splitter PR for the credentials to review the show.

We would like to thank Douglas Sitler from The University at Buffalo for the credentials to take part in the Q&A.