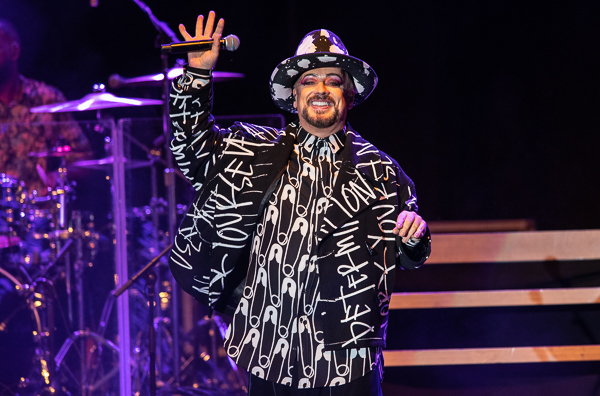 As the summer winds down, Artpark closed their season with a bang this past Wednesday night. New wave bands Boy George with Culture Club and the English Beat played before a die hard crowd wanting to hear hits that both of these bands served up from their formative years back in the 80’s. The weather couldn’t have been more perfect as the sun and breeze accompanied some fantastic tunes all night long.

First up was The English Beat.  The band has always been about fun and mixing different elements within their music. This show and delivery was no different. The band has been at it since 1978 and led by original member Dave Wakeling. The 40 minute set included a little bit of everything. It included the bands know hit “Save It For Later” and Wakeling’s other project General Public’s “Tenderness.” It also incorporated the Staple Singers cover “I’ll take You There.” A great mix of ska, new wave, punk and reggae for good measure. It was a solid set performed by the band.

Headliners Boy George with Culture Club made their second appearance in 4 years on the Artpark stage. Outside of George, the band still has original members Roy Hay and Mikey Craig. Drummer John Moss officially left in 2021. The original members were accompanied by 3 background singers and a drummer, percussionist, keyboardist and a sax player to round out the sound. The band opened up with a brand new single called “Next Thing Will be Amazing.” You can classify the tune as a very happy track that incorporated a nice dance mix to it. A few new single’s like “Eyeliner Voodoo and “Drop the Needle” also had that Culture Club esque’ sound to them. George has been releasing new tracks like crazy and all of these fall into that category. Of course, all the hits were covered but a different rendition was tried with “Do You Want to Hurt Me” as the band slowed it down and took a different approach with it. I actually liked it and appreciated the new rendition of this major hit. George had a different segue into almost every song the band performed which gave a nice build up to the track that was forthcoming.

I thought the 1 hour and 45 minuet set was perfect. It was a nice blend of new, old and a few covers thrown in for good measure. George’s voice was terrific and his bandmates playing were spot on. Hay even dabbled on the keys on a few different occasions.  This show was night and day compared to the 2018 performance which lacked in many different areas. This was a fantastic show that had it all in my opinion!

Next Thing Will be Amazing

Everything I Own (Bread cover)

Do You Really Want to Hurt Me

Church of the Poison Mind/I’m Your Man (Wham cover)

Time (Clock of the Heart)

Sympathy of the Devil (The Rolling Stones cover)