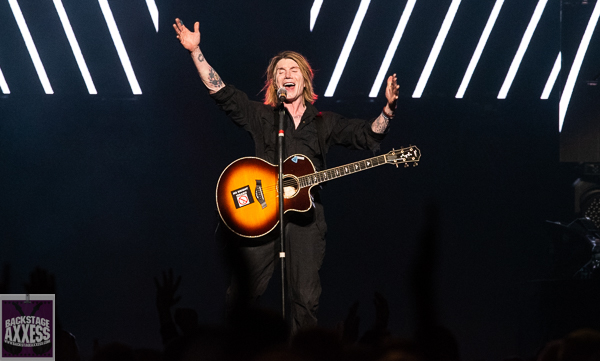 The Goo Goo Dolls wrapped up their first leg of their tour in support of their latest effort ‘Chaos in Bloom’ that was released last month. I can’t think of a better way  to wrap up this part of the tour than to play in front of their hometown fans in Buffalo, NY. The band has played numerus venues over the past decade in the Buffalo area but haven’t played the KeyBank center in 19 years. The band wanted to ensure they didn’t play Darien Lake (outdoor venue) and wanted to play the arena. Opening up the show were Blue October.

First up were Blue October. The band originates form Houston, Texas and have been around since the mid 1990’s. They are getting ready to release their 11th studio effort called ‘Spinning the Truth Around: Part 1’  in a few weeks. So, the 5 piece band led by charismatic front man Justen Furstenfeld, went through their back catalog of tunes.  Their 50 minute set included songs like “Coal Makes Diamonds,” Into the Ocean” and  “Hate Me.” The band held the interest of the crowd and were able to get them ready for the headliners in the Goo Goo Dolls.

Before the Goo Goo Dolls took to the stage, County executive Mark Poloncarz made an appearance and declared it Goo Goo Dolls day. Taking the stage at about 9:05pm, their long awaited return to the KeyBank Center was about to go down. Finally both Johnny Rzeznik  and Robby Takac appeared as the band went into the opening track of off their latest effort called “Yeah, I Like You.” Aside for both Rzeznik and Takac, the touring band also includes longtime guitarist Brad Fernquist, drummer Craig Macintyre and bassist Jim McGorman.

After the opening track, the momentum kept going as it went into one of the bands hit tracks in “Slide.” Rzeznik let out a “Hey Buffalo,” and that was the first of one of many references of Buffalo made throughout the show.  Of course, even before the band played “Black Balloon” their were plenty of them floating around the arena before and during the song was played. “Over and Over” was one of the highlights as its seems the band really started to take off and brought the crowd with them. When it was Takac’s turn to take over leading vocals on ‘Lucky Star,”  Takac let out a “Oh Buffalo, how I love you” right before going in to the song. For “Come to Me,” Rzeznik found a couple holding up a sign saying they were celebrating their 7th wedding anniversary. He dedicated the song to them. Even the well oiled machine of the Goo Goo Dolls can have an issue. Rzeznik called a mulligan on “Sympathy” and asked the crowd for ado over as he forgot the lyrics. He tried to start it again and started it off wrong. He laughed and said, this isn’t planned. Can we come back to this? Then he proceeded to remember the words and decided to carry on and do the song. What’s’ a concert nowadays without some sort of confetti raining down during it? This took place during “Going Crazy.” A little something different was added to the tune “Broadway as Rzeznik added a harmonica to the solo part of the track. I loved the different flavor added to this classic song.  For possibly the bands biggest hit in “Iris,” Fernquist played a mandolin and they had one of techs come out to play violin. I was glad that the band tried to say as true to the track as much as possible without adding pumped in parts to it. For the entire show, Rzeznik switched out guitars for every song as she went back and for the between electric and acoustic. The band returned to for an encore and added the Tom Petty classic “Runnin’ Down a Dream” that wasn’t even on the original setlist. What a nice bonus to for their hometown crowd!

Rzeznik’s voice still sounds as sharp and clear as ever. As I stated below, the band was firing on all cylinders. Their were plenty of emotions going through both Rzeznik and Takac throughout the show. You can tell this wasn’t an ordinary show for the band. Every time they come  back to the area its  special show. Not only for the fans but the band themselves. What a terrific night for all who attended!

Yeah, I Like You
Slide
Big Machine
Here Is Gone
Black Balloon
Naked
Miracle Pill
Over and Over
Lucky Star
Free of Me
Come to Me
Sympathy
Name
So Alive
War
Going Crazy
Life’s a Message
Bringing On the Light
Broadway
Better Days
Iris

We would like to thank Paulette Ely from BB Gun press for the credentials to review the show.