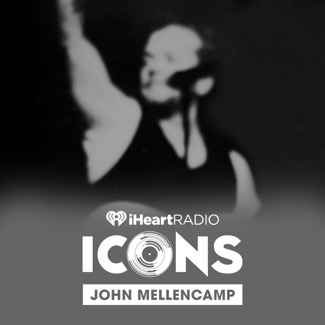 September 26, 2022—The Rock & Roll Hall of Fame confirm the Hall’s newest permanent exhibition, Legends of Rock: John Mellencamp, opening September 29 at 10am.
iHeartRadio will broadcast the opening for a special live edition of “iHeartRadio ICONS with John Mellencamp” nationwide featuring a performance by Mellencamp at the Rock and Roll Hall of Fame. Mellencamp will speak with iHeartMedia’s on air personality Jim Kerr about the exhibit and a very special tour announcement. The performance and interview and will air at 5 p.m. EST on September 29 across select iHeartMedia Classic Rock, Adult Hits, Classic Hits and Variety stations nationwide.
“John is one of the great singer songwriters of our time, who has had a profound impact on music and culture,” said John Sykes, President of Entertainment Enterprises. “We are thrilled to be there in Cleveland to broadcast this special honor for such an influential artist.”
To purchase general admission for Thursday, September 29 to experience John Mellencamp Fan Day or to reserve a free ticket to A Conversation with John Mellencamp, visit rockhall.com.
The John Mellencamp Fan Day experience will include highlights from Mellencamp’s induction and Rock Hall moments screening all day in the Ahmet Ertegun Exhibition Hall, an interactive Garage Takeover where fans can learn, play or sing Mellencamp songs in the Jam Room with actual instruments, a Long Live Rock photo opportunity for fans and plus food, bar trucks and the beer garden open, Rock Boxes located in downtown Cleveland along East 9th Street playing Mellencamp’s music, as well as educational activities on their Rock Hall EDU site.
The Rock & Roll Hall of Fame’s beloved Legends of Rock exhibit is expanding, now spanning four floors with artifacts from Prince, Stevie Nicks, Bruce Springsteen, The Roots, Jimi Hendrix and more. The Rock Hall continues to expand their collection with the inclusion of John Mellencamp to the popular, growing exhibit.
Museum goers can expect to see artifacts including the suit worn in promotional photos for Mellencamp’s 2003 album Trouble No More, his 1976 Fender Telecaster Custom guitar played onstage extensively and the studio tracking chart for “Jack and Diane” from 1981, a guitar gifted to Mellencamp by David Bowie, and also representing his art will be an oil painting by Mellencamp himself, Backbone (2022).
Mellencamp is also planning a forthcoming tour starting in the winter of 2023. Details to be announced soon. To stay up to date on tour news and more, sign up at Mellencamp.com
A reissue of Mellencamp’s beloved eighth studio album Scarecrow is set for release November 4 on Mercury/UME. The box set will include two CDs of newly remixed and remastered songs plus previously unreleased bonus tracks and alternate versions, a booklet full of rare photographs and all new liner notes by acclaimed author and music critic Anthony DeCurtis. Pre-order HERE.
Mellencamp is a member of the Rock and Roll and Songwriters Halls of Fame, a recipient of the John Steinbeck Award, ASCAP Foundation’s Champion Award, The Woody Guthrie Award, the Americana Music Association’s Lifetime Achievement Award, and most recently, the Founders Award, the top honor assigned by the American Society of Composers, Authors and Publishers.
About the Rock & Roll Hall of Fame:
Rock Connects Us. Our mission is clear: To engage, teach and inspire through the power of rock & roll. We share stories of the people, events, and songs that shape our world through digital content, innovative exhibits, live music, and engaging programs. At the Rock Hall, we are dedicated to making a difference. We intentionally foster a diverse and equitable Museum that encourages and embraces creativity and innovation. As a community leader, we value, empower, and respect all people. Diversity, Equity, Accessibility & Inclusion is more than just a policy. It supports our mission and defines our future. Join the millions who love it as much as you do. Experience us live or online – Visit rockhall.com or follow the Rock Hall on Facebook (@rockandrollhalloffame), Twitter (@rockhall), Instagram (@rockhall), TikTok (@RockHallFame), and YouTube (youtube.com/rockhall). Long Live Rock!
About iHeartMedia
iHeartMedia, Inc. [Nasdaq: IHRT] is the leading audio media company in America, reaching over 90% of Americans every month. iHeart’s broadcast radio assets alone have more consumer reach in the U.S. than any other media outlet; twice the reach of the next largest broadcast radio company; and over four times the ad-enabled reach of the largest digital only audio service. iHeart is the largest podcast publisher according to Podtrac, with more downloads than the next two podcast publishers combined and has the number one social footprint among audio players, with seven times more followers than the next audio media brand, and the only fully integrated audio ad tech solution across broadcast, streaming and podcasts. The company continues to leverage its strong audience connection and unparalleled consumer reach to build new platforms, products and services. Visit iHeartMedia.com for more company information.