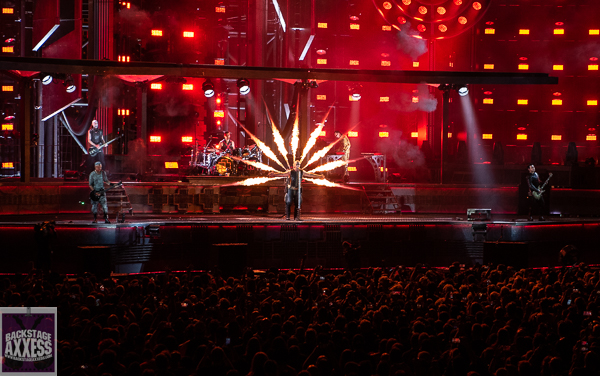 You haven’t gone to a show until you go to a Rammstein show. The German metal band is known for their over the top performances. With a new album ‘Zeit’ in tow, the band had a lot of material to work from. The band still has all of it’s original members which consist of: Till Lindemann on lead vocals, Richard Kruspe on lead guitar, Paul Landers on rhythm guitar, Oliver Riedel on bass, Christoph Schneider on drums, and Christian “Flake” Lorenz on keyboards. Only 9 North American cities were booked for this tour that was originally scheduled for 2021. It was postponed due to the pandemic. So for me, it was a determination to travel to see one of the few shows since it wasn’t booked in anywhere around the WNY and surrounding areas. I didn’t want to miss out as the band only tours North America about every 3 to 5 years on average.

At exactly 8:05 pm, Schneider took his spot behind the kit as the rest of the band joined him one by one. Once all in place, a flash of fireworks went of and the show opener  “Armee der Tristen” started. Lorenz led the band into the 2nd song “Zick Zak” with his methodical keyboard playing. Both Schneider and Lorenz ran in place as the band went into “Links 2-3-4.” Rammstein are known for as much pyro as a Macy’s 4th of July display. The pyro finally made an appearance during “Zeig Dich.”  One of the most animated front man out there is Till Linderman. Linderman’s facial expressions to the crowd energized the crowd before the band kicked into “Mein Herz brennt.” Of course, the one song that just about everyone seem to give even more energy back to the band was the familiar “Du hast.” The concert had a lot of props throughout. Before the song “Puppe,” A carriage appeared that eventually was set on fire while cannons shot off  black confetti. The props continued into the 1st encore. For “Pussy,” Lindemann rode a phallus-shaped cannon that discharges white foam on the audience.  The band performed a piano rendition of “Engel” (with help from opening act Duo Jatekok and Duo Abélard) on a small stage located in the middle of the stadium. After the song, all the members of Rammstein (minus Lindemann)  eventually crowd surfed back to the main stage on inflatable boats. I never seen anything like that and though what a way for members to get up close an personal with the audience members on the floor.  During the 2nd encore, Lindemann had a backpack that shot flames that looked like a fire flower. The show began as it ended, with an explosion. The band exited via lift to a multitude of explosions.

If you never seen a Rammstein show you have no idea what your missing. A mixture of industrial, gothic and hard rock surrounded by a visual show that is second to none. You have 5 very well seasoned musicians that are on top of their game. Its hard to keep topping yourself but Rammstein continues to find ways to do it.

We would like to thank Jillian Condran from Nasty Little Man for the credentials to review the show.