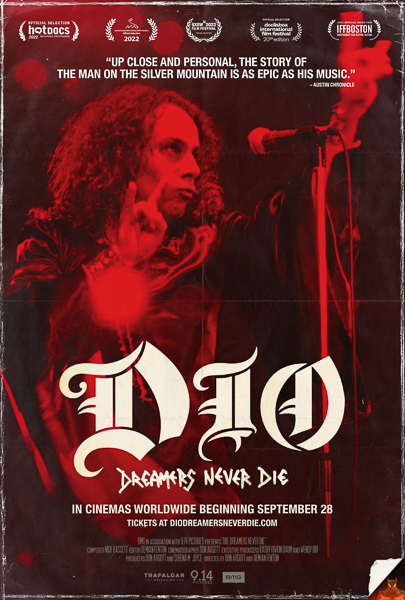 Metal icon Ronnie James Dio was not only one of the best vocalists in metal, but one of the best vocalists in music period. Its been over 12 years since he has passed away but his spirit lives on through his music and now in an autobiography about his life story called ‘Dio: Dreamers Never Die.’ Executive Producers Kathy Rivkin Daum and Ronnie’s then wife Wendy Dio ensured that a proper story was told for not just the fans, but for people who were unfamiliar of Ronnie’s story.

The movie, which was a little over 2 hours long, encapsulated his entire life and music career which started out when he was  a small boy in the town of Cortland, NY. His music career started out as a trumpet player. He then switched to a vocalist and his first record as vocalist appeared under Ronnie and the Red Caps in 1960. Through his musical journey which lasted all the way up until his death in 2010, all the music ventures were discussed including his time in Rainbow, Black Sabbath and his solo band. Also, the documentary talked about his side projects including his direction on putting Hear ‘n Aid  together. This was the rock’s version of the pop music world’s “We Are The World.” This ended up raising over a  million dollars for the famine in Africa at the time. Meeting his wife Wendy at the infamous Rainbow bar & Grill in the  mid 1970’s was also discussed. There were many guest appearances including former bandmates in Tony Iommi and Geezer Butler to name a few. Butler talked about Dio’s devotion to his fans like no other. “There were times at 2 or 3 am that Ronnie would be out talking to fans and we be yelling at him that we needed to go. Thats who Ronnie was remarked Butler. He knew them and remembered their names and stories they told to Dio prior. It was really amazing!”

The team put together a well informed documentary that not just metal fans would enjoy, but any music fans in general. Hurry as the last day of showing is October 2, 2022. Check Here for listings in your area.