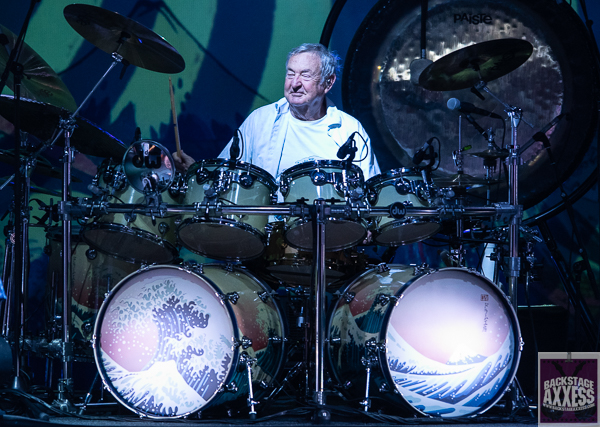 For the 2nd time in just over 3 years, Nick Mason brought his band Nick Mason’s Saucerful of Secrets to Shea’s Performing Arts Center. They are calling this the ‘The Echoes Tour.’ Nicks’ band is comprised of bassist Guy Pratt on bass, Dom Beken on keyboards and both Lee Harris and Gary Kemp on guitar. Mason put this project together to focus on the early recordings of his band Pink Floyd. This was before the best selling ‘Dark Side of the moon’ was released back in 1973, which took the band into an entirely new direction. So, everything the fans were to about to hear were from Pink Floyd’s formative years. The band does have one live album under its belt titled “Live at the Roundhouse,” which was released back in 2020.

The band took to the stage at around 8:15pm and opened up with “One of These Days” which was off Floyd’s 6th studio effort ‘Meddle.’ After the track, Mason got up from his kit to say a few words to the audience (which he would do a few times throughout the show). He talked about playing the area for the 1st time; which was the Niagara Falls Exhibition back in 1971. You can tell there has been a love for the music ever since and maybe even before Floyd’s first time playing the area. Seeing the reactions on people faces as songs like “Obscured by Clouds” and “Set the Controls for the Heart of the Sun” were played, you can just see it in their faces. It really brought a lot of smiles to the masses.

The band took a 20-minute intermission and came back out to do another 6 songs including the full version of “Echoes.” It really seemed throughout the band was locked in and loaded. Vocals were shared between Pratt and Harris throughout, when they were needed. A lot of the set was instrumental. Homage was paid to former bandleader Syd Barrett as they talked about two songs “Lucifer Man” and going back to the 1st set in “Vegetable Man.” What was cool about “Vegetable Man” was Mason talked about it never being finished by Barrett. It was completed for a box set that as released back in 2011. I appreciated that the band really dug deep for tunes to play for the setlist. Which was great to see and hear. I should mention that psychedelic images adorned the backdrop for the night’s festivities.

The 2 and half hour show was an early Floyd fans delight. Fans who really liked the band at the beginning, would be in their glory attending one of these shows. Mason is trying to keep the Floyd name out there but by showcasing the bands earlier work. I think it’s a terrific way to go about it and the fans who love the band would agree as well!

One of These Days (Pink Floyd cover)

When You’re In (Pink Floyd cover)

We would like to thank Cristina Parvu from Rogers & Cowan for the credentials to review the show.