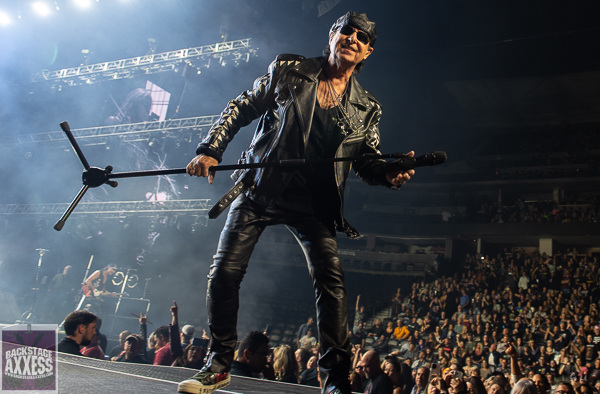 A mixture of classic and new rock came alive this past Thursday night when the Scorpions and Thundermother came together to give a night of memorable music. The German rockers the Scorpions have been add it for well over 50 years and even released their first studio effort in 6 years titled ‘Rock Believer.’ Traveling from coast to coast (no pun intended) over the last several months the band is nearing its completion of the U.S. run of dates. Before that takes place, a stop at Ball Arena was in order. The Scorpions brought out new rockers from Sweden called Thundermother with them as well.

Taking the stage first was Thundermother. This all women quartet just released its 4th disc in the last 8 years called ‘Black and Gold.’  The 40 minute setlist contained 5 songs off it and some past tunes for the fans alike. Many fans including me had little to no familiarity with the band. Songs like “Whatever,” “Back in ’76” and my personal favorite “Loud and Free”  really showed that these women belong on an arena stage. In fact, they stage presence said to me that they are really seasoned pros. I love there straight ahead no frills rock approach. I hope to see them do a headlining set sooner than later.

It’s been some years since I seen the Scorpions live. Since that time, their drummer James Kottak left and Mikkey Dee (Motörhead) took over back in 2016.  For this tour, the band had a Las Vegas theme light show. They had an extended ramp that the band used a ton. Especially guitarist Rudolph Schenker which he was up and down all night. Especially during “Make it Real” as he ran up to the tip to play for the audience and the photographers during the choruses. Vocalist Klaus Meine’s vocals are still as strong as ever. Especially when the band did back to back ballads. On the tune “Send Me an Angel,”  the track sounded sounded almost like the record. At 74 years young, he hasn’t lost a step. He tossed out his own drumsticks throughout the show. On both ballads, Schenker and Jabs played acoustic guitars on both tracks. On “Send Me an Angel, Schenker played a beautiful Gibson Flying V Guitar. Matthias Jabs used a talk box on the song “The Zoo” and was at the forefront during “Delicate Dance.” Schenker actually existed to give Jabs the spotlight and was joined on the other guitar by his guitar tech Ingo Powitzer. There was bass and drum solo so both Dee and bassist Paweł Mąciwoda played it up as the screens depicted slot machines with various Scorpion logos. Schenker channeled his inner Ace Frehley as he also used a smoking guitar during “Blackout.” His was different as it a cannister attached to the top part of the body of his flaying V. That cannister is where the smoke slowly exited throughout the track. After a crowd pleasing “Big City Nights,” the band tossed out a ton of stuff that included picks, drumsticks towels and it seems anything else they could get their hands on. They then returned to Meine stating “There Is No One Like You Colorado” as the band went into “No One Like You.” They closed out with “Rock You Like a Hurricane.” They again tossed out a bunch of souvenirs for the fans.

The Scorpions have been around for over 50 years.  There isnt anything that band hasn’t seen or done. Many styles have come and go but one thing is for certain. With a new album in tow, the band seems like they still have something to prove. On Thursday night, they proved they still have it and can still deliver a high quality performance.

Gas in the Tank

Send Me an Angel

Tease Me Please Me

We would like to thank Amy Sciarretto for the credentials to cover the show.