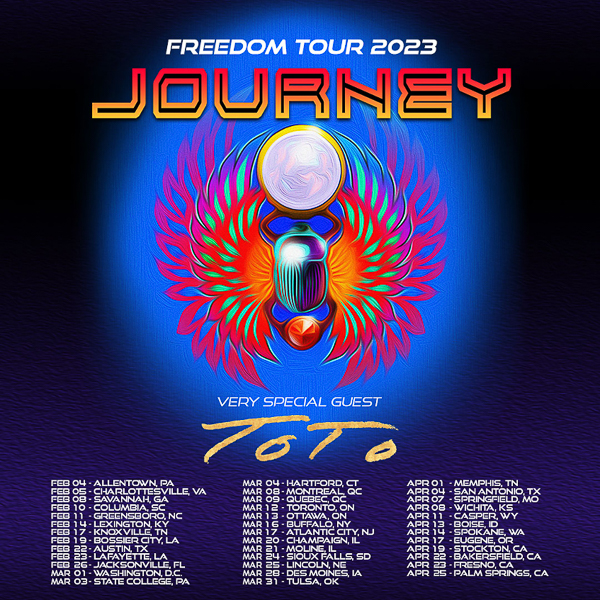 October 17, 2022 – One of the most legendary rock bands of all time, JOURNEY, announces the continuation of their highly successful tour with the 50th Anniversary Celebration Freedom Tour 2023 featuring, very special guest TOTO.  JOURNEY, Diamond-selling Rock & Roll Hall of Famers will take the stage in 38 cities across North America with their catalog of global chart-topping hits, including “Don’t Stop Believin”, “Any Way You Want It”, “Faithfully”, “Lights” and more.  Presented by AEG Presents, JOURNEY Freedom Tour 2023 begins February 4 in Allentown, PA – making stops in Austin, Montreal, Memphis and more – before wrapping April 25 at the brand new Acrisure Arena in Palm Springs, CA.  The 2023 run includes rescheduled dates in Washington DC, Hartford, Toronto and Quebec that were postponed earlier this year due to covid. Citi is the official card of the JOURNEY 50th ANNIVERSARY Freedom Tour 2023.  Citi cardmembers will have access to presale tickets for theU.S. dates beginning Tuesday, October 18th at 10am local time until Thursday, October 20th at 10pm local time through Citi Entertainment (excluding Canada, Washington DC and Hartford shows). For complete presale details visit www.citientertainment.com  A limited number of exclusive VIP Packages are also available. These exceptional offers can include an amazing selection of reserved seated tickets, custom merchandise and much more.  Tickets go on sale to the public Friday, October 21 at 10am local time HERE JOURNEY features Founder, Neal Schon (lead guitarist), Jonathan Cain (keyboards, backing vocals), Arnel Pineda (lead vocals) Jason Derlatka (keyboards, vocals), and Deen Castronovo (drums, vocals) and Todd Jensen (bass).  Neal Schon, 3x Hall of Fame inductee: Oklahoma Hall of Fame, Rock & Roll Hall of Fame, Grammy Hall of Fame.  Jon Cain is a recipient of two BMI songwriter awards and was inducted into the Rock and Roll Hall of Fame as a member of Journey. Neal Schon: “We are all thankful and overwhelmed by the success of our Journey Freedom Tour 2022 this year and have added a new run of dates for 2023” says JOURNEY Founder Neal Schon. “We are looking forward to hitting the road again with our very good friends Toto!  Come join us for a special evening full of fun and Rockin’ good memories.  See you soon Friends.” Jonathan Cain adds “Excited to perform for our fans as we tour next year with Toto. The combined hits of both bands represent a couple of decades of excellence that have become a soundtrack for people’s lives. The music of Journey along with the music of Toto is an example of “certain music” during “uncertain times”.Very special guest TOTO, who have collectively streamed more than 3.3 billion plays on Spotify alone based on hits including “Rosanna”, “Africa” and “Hold the Line”, will join JOURNEY on all dates. TOTO’s Steve Lukather shares, “’On behalf of myself and the band, we are very honored and excited to do this tour with our old and dear friends JOURNEY. Gonna be a great night of music, and as all the guys are lifelong friends… a blast off stage as well.”