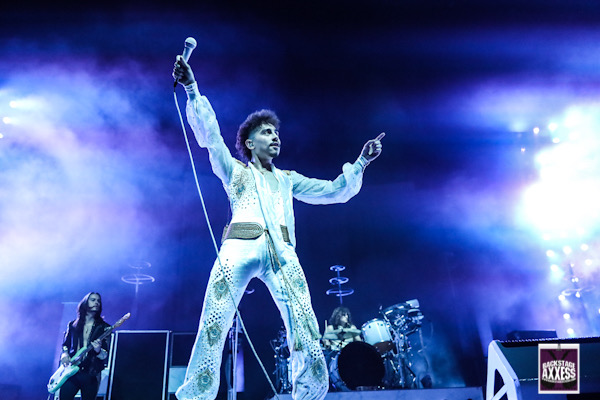 Since their debut single “Highway Tune” back in 2017, Greta Van Fleet has seen a rapid rise to the top in the rock and roll world. The band has gone on to release two full length albums, toured all over the world, played all the largest music festivals, and even won a Grammy Award for Best Rock Album. Greta is currently out on the road across the United States on the Dreams In Gold Tour and recently made a stop right here in Charlotte at Spectrum Center.

Fans had been camping out for days and waiting since the early morning hours in line to get a coveted spot up close to the barricade and the near capacity crowd was showing just how eager they were to see their favorite band live. The audience was largely young, female fans dressed up, many with flowers adorned in their hair as well as middle-aged adults who no doubt appreciate the band’s sound which harkens back to our younger years. In fact, Greta Van Fleet is often compared to the mighty Led Zeppelin which is understandable given their blues and folk influences.

When the curtain appeared completely covering the stage,  I could hear the screams and cheers from all the way in the back of Spectrum Center. The barricade was jam packed with excited fans, a few of which were feeling faint, because they knew it was almost show time. The lights went out and you could hear the introduction before the curtain dropped and the band fired right into “Built by Nations” from the 2021’s album ‘The Battle at Garden’s Gate.’ In fact, much of the set list would encompass that record. The lights were red and interspersed with blinding whites as several light rigs at the back of the stage changed color. Lead vocalist Josh Kiszka is becoming quite the front man, commanding the audience at will while guitarist Jake Kiszka showed just how talented he is. Sam Kiszka would alternate between bass guitar and keyboards depending on the song while drummer Danny Waagner was situated atop a staircase style riser lit with plenty of LED lights. Greta was on fire musically and the crowd was eating it up. We even had pyro going off in the first song, which would appear later in the set.  “Safari Song” really got things moving as did a great drum solo which followed. At times, Josh would really just light up the venue with his vocals and I couldn’t get enough of his vibe. But for me, Jake was the highlight of the show as his guitar skills are truly second to none and I couldn’t stop watching him. They closed out the evening with the ethereal “The Weight of Dreams” as the stage lights and pyro encapsulated the feel of the song.

Not more than a second after the lights went out, the screams of “Greta! Greta!” could be heard in a thundering roar. The band returned for a two-song encore which ended with the popular “Highway Tune” which was interspersed with Aruther “Big Boy” Crudup’s “That’s All Right” which had Josh putting on his best musical theatre flair. As the band said their final farewell, the crowd didn’t move an inch hoping and praying to get just one more song.  Alas, the show was over and our memories of this magical evening would have to suffice until next time.

The Weight of Dreams

We would like to thank Kim Shiver from Livenation for the credentials to review the show.