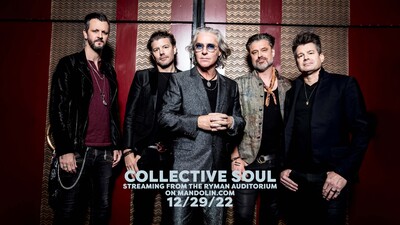 COLLECTIVE SOUL
RINGS IN THE NEW YEAR
WITH LIVESTREAM CONCERT EVENT
DECEMBER 29 – JANUARY 1;
TICKETS AVAILABLE TODAY VIA MANDOLIN
December 6, 2022 — COLLECTIVE SOUL–Ed Roland (vocals/guitar), Dean Roland (rhythm guitar), Will Turpin (bass/background vocals), Jesse Triplett (lead guitar/background vocals), Johnny Rabb (drums/background vocals)—wants to ring in the new year with their fans with a special livestream concert event filmed earlier this summer in Nashville that will be available starting at 8:30 p.m. ET on December 29 – January 1 courtesy of Mandolin.
The show will premiere at 8:30 p.m. ET on Thursday, December 29. Fans will have two ticket options: $15 for a one-time viewing during the premiere and $20 for premiere access with unlimited on-demand replay access until 11:59 p.m. on January 1. All tickets will be available starting Tuesday, December 6 at 11 a.m. ET on Mandolin’s website.
COLLECTIVE SOUL filmed the concert at the historic Ryman Auditorium in Nashville, TN, where they performed on September 11 during their summer tour. Fans will get to rock out to classic hits as well as songs from their critically acclaimed 11th studio album, VIBRATING, which was released August 12 on their label, Fuzze-Flex Records via AMPED Distribution, on CD, vinyl and digital formats everywhere music is sold.
VIBRATING sends the band’s artistic spirit into the next stratosphere. All ten songs positively pulsate with the boundless energy that has been COLLECTIVE SOUL’s aural calling card for over three decades. From the propulsively gnarly kiss-off of “Cut the Cord” to the reflective mid-tempo jangle of “Take” to the heart-wrenching reality check of “Rule No. 1” — replete with a soaring string section, no less! — to the choir-backed emotional crossroads of “Where Do I Go,” VIBRATING contains 42 minutes of irrefutable sonic evidence of a band wholly uninterested in sitting still.
In touring news, COLLECTIVE SOUL are already making their touring plans for 2023, with a handful of shows announced so far.
Check out COLLECTIVE SOUL at any of the following stops:
DATE               CITY                             VENUE
Fri 1/13             Rancho Mirage, CA       Agua Caliente
Sat 1/14            Las Vegas, NV              Pearl Theater
Thu 1/26           Anaheim, CA                 City National Grove of Anaheim
4/26-4/29           Cancun, Mexico            Hootiefest – The Big Splash 2023
www.collectivesoul.com
www.facebook.com/collectivesoul
www.twitter.com/collectivesoul
www.instagram.com/collectivesoul
www.youtube.com/user/collectivesoultv
###