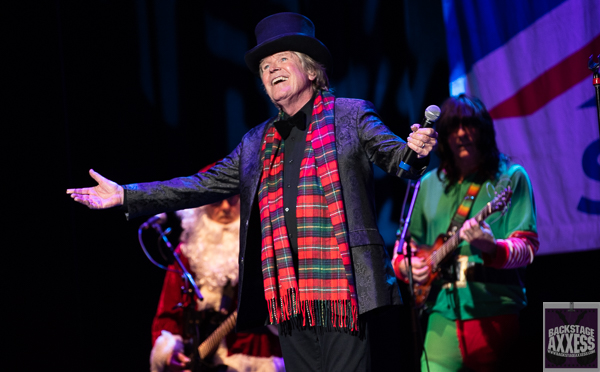 Touring for over 60 years, there isn’t much that Peter Noone hasn’t seen or done. At age 14, he became the singer of the British band Herman’s Hermits. The band went onto a steady career that included selling more than 60 million records.  He has performed on the biggest shows at the height of the bands popularity; Jackie Gleason, Dean Martin and Ed Sullivan. Noone has been performing under the moniker Herman’s Hermits starring Peter Noone since the 1980’s. He brought his Christmas show to one of the crown jewels of the Western New York area in the Riviera Theater in North Tonawanda this past Saturday night. Even though Noone has made numerous appearances to the WNY area over the last several years, this was my 1st time taking in one of his shows. You can say I was very curious what the 75 years young Noone still had to offer.

Taking the stage at 8;30pm, Noone went into a traditionally Christmas song in “Jingle Bells.” Noone was super energetic throughout. he worked every inch of stage and had a lot of communication with the audience. He told many of jokes throughout as well as sang not only Christmas classics, he also sang a lot of the Herman’s Hermits hits. He even made his was through the crowd during “Do Wah Diddy Diddy.” He found a woman that had the “Hold On” album that Noone proudly displayed and talked about. Noone wasn’t just all talk and interaction. He still has solid voice and that wasn’t more evident than on the track “When a Child is Born.” He changed the words to one of the lines in “Ferry Cross the Mersy.” He changed it to “So, ferry cross the Tonawanda (Canal) ‘Cause this land’s the place I loveAnd here I’ll stay.” Many appreciated the local reference.

Even though the band played mostly medleys of the songs on the setlist, I thought the show flowed seamlessly. Between the good mix of Christmas songs, Herman’s Hermits classics and Noone’s banter with the audience, it really made for such an entertaining Christmas show.  I have to say that it won’t take me long to see him the next time none comes to town.  I was really impressed with this show and you should catch the show if it comes to your area.

Love Potion No. 9 (The Clovers cover)

She’s a Must to Avoid

When a Child is Born (Ciro Dammicco cover)

Can’t You Hear my Heartbeat?

Rudolph the Rednose Reindeer  (Johnny Marks cover)/Mrs. Brown, You Got a Lovely Daughter

There’s a Kind of Hush (The New Vaudeville Band cover)

We would like to thank David Fillenwarth from the Riviera Theater for the credentials to review the show.