KELLY CLARKSON & ARIANA GRANDE KICK OFF THE HOLIDAYS WITH LIVE RENDITION OF “SANTA, CAN’T YOU HEAR ME”

WHEN CHRISTMAS COMES AROUND SPECIAL AVAILABLE NOW VIA ATLANTIC RECORDS

Global superstars Kelly Clarkson and Ariana Grande are kicking off the holiday season with a stunning live rendition of their original duet “Santa, Can’t You Hear Me” – available now via Atlantic Records. The performance aired as part of NBC’s Kelly Clarkson Presents: When Christmas Comes Around holiday spectacular, which featured highlights from Clarkson’s GRAMMY-nominated ninth studio album When Christmas Comes Around….

When Christmas Comes Around… explores a wide range of holiday emotions and experiences anchored by Clarkson’s incomparable vocal prowess. The album also features cheerful standout “Glow” featuring Chris Stapleton and the fabulously bold single “Christmas Isn’t Canceled (Just You),” the latter of which was deemed “a sassy bop” by Entertainment Weekly and “infused with empowerment” by USA Today. The 15-track collection saw Clarkson reunite with long-time collaborators Jason Halbert, Jesse Shatkin and more for a mix of new original songs and Christmas classics.

Emmy Award winning talk show host, GRAMMY Award winning artist and America’s original idol, Kelly Clarkson, is one of the most popular artists of this era with total worldwide sales of more than 25 million albums and 40 million singles. Clarkson is currently filming season 4 of her own multi-Emmy Award-winning daytime talk show, The Kelly Clarkson Show, which has already been picked up for its 5th & 6th seasons.

The Texas-born singer-songwriter first came to fame in 2002 as the winner of the inaugural season of American Idol. Clarkson’s debut single, “A Moment Like This,” followed and quickly went to #1 on Billboard’s Hot 100, ultimately ranking as the year’s best-selling single in the U.S. Further, Clarkson is one of pop’s top singles artists, with 17 singles boasting multi-platinum, platinum and gold certifications around the world, including such global favorites as “Miss Independent” and “Because of You.” Clarkson has released nine studio albums (Thankful, Breakaway, My December, All I Ever Wanted, Stronger, Wrapped in Red, Piece By Piece, Meaning of Life, When Christmas Comes Around…), one greatest hits album and two children’s books (New York Times Top 10 bestseller River Rose and the Magical Lullaby and follow-up, River Rose and the Magical Christmas).

She is the recipient of an array of awards, including three consecutive Daytime Emmy Awards for “Outstanding Entertainment Talk Show Host” of The Kelly Clarkson Show, three GRAMMY Awards, four American Music Awards, three MTV Video Music Awards, two Academy of Country Music Awards, two American Country Awards and one Country Music Assn. Award. She is also the first artist to top each of Billboard’s pop, adult contemporary, country and dance charts & was also the winning coach on seasons 14, 15, 17, and 21 of The Voice. 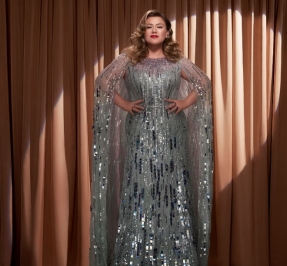