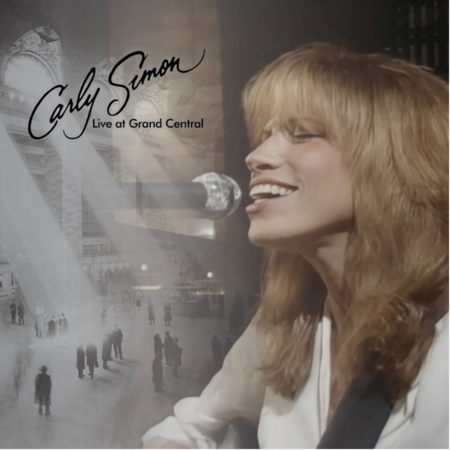 January 20, 2023—Carly Simon is unveiling a version of “That’s The Way I’ve Always Heard It Should Be” from her forthcoming Live at Grand Central legendary surprise concert which is being released on audio and Blu-ray for the first time on January 27. Listen/share HERE.
The video for Live at Grand Central has been digitized, converted to HD and re-edited, while the audio has been re-mixed by multi-Grammy Award winning producer and engineer Frank Filipetti. The concert will be available on Blu-ray, CD, vinyl and digital streaming platforms via MRI/Legacy Recordings, the catalog division of Sony Music Entertainment. A very limited-edition colored vinyl is also available. Pre-order HERE.
In April 1995, commuters walking through Grand Central were pleasantly surprised to stumble upon Simon and her band performing a full, unannounced concert in the middle of the main terminal. The concert—Simon’s first in fourteen years—was filmed and aired on the Lifetime network for a television special which was released on VHS later that year.
Simon was recently inducted into the Rock & Roll Hall of Fame, a special evening which featured performances by Olivia Rodrigo and Sara Bareilles.
Her exhibition is officially open now at the historic Cleveland museum, including her original outfit and some original prints from the famous Norman Seeff photo shoot for the cover of Playing Possum, handwritten lyrics from an early draft of “You’re So Vain,” and her custom-made Taylor guitar with beautiful personalized inlay work. Exclusive merchandise is available including a limited edition 100% silk scarf personally designed by Carly via her website HERE and exclusive co-branded merch in collaboration with the Rock Hall with proceeds going to Rock Hall’s educational programs website HERE.
Born and raised in New York City, Simon is a Grammy-award winning musician, singer-songwriter and author whose career spans over five decades. In the ’70s Simon had a string of chart-topping hit singles including the beloved “You’re So Vain” which reached #1, as well as “Anticipation,” “Nobody Does It Better,” “Coming Around Again,” “Mockingbird” with James Taylor and more. Simon has received an Academy Award, Golden Globe Award, been inducted into the Songwriters Hall of Fame, received a Berklee College of Music Honorary Doctor of Music Degree and been nominated for a star on the Hollywood Walk of Fame.
LIVE AT GRAND CENTRALTRACK LIST
1. Touched By The Sun2. Anticipation3. I’ve Got To Have You4. We Have No Secrets5. Haven’t Got Time For The Pain6. Jesse7. That’s The Way I’ve Always Heard It Should Be8. Letters Never Sent9. Legend In Your Own Time10. De Bat (Fly In My Face)11. Davy12. Halfway Around The World13. Like A River14. Coming Around Again15. Let The River Run