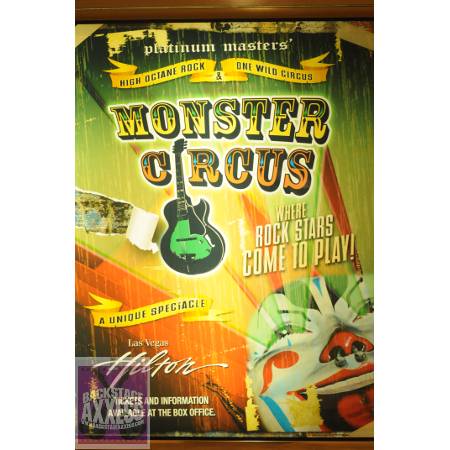 A very interesting show invaded the Las Vegas circuit in March 2009. This unique performance tends to stray away from the general population who tend to go see more mainstream acts like Cher, Blue Man group, or Elton John (to name a few.) This show is geared solely for the younger Generation Xers that grew up in the MTV generation (when they used to play videos folks.) A time when hard rock bands ruled the airwaves and the play lists of video programming shows. The same showroom who hosts the Barry Manilow show (and who also hosted Elvis back in the 1970’s) now can boast that they have something for the rocker, that show is called the Monster Circus.

The back-to-back shows I saw consisted of this line-up: vocalist/guitarist John Corabi (formerly of Motley Crue), guitarist/vocalist Tony Montana (formerly of Great White), drummer Fred Coury (Cinderella), guitarist Dave Kushner (Velvet Revolver), bassist Rudy Sarzo (Blue Oyster Cult) Brent Fitz (formerly of Theory of a Deadman) and special guest vocalist Dee Snider (Twisted Sister.) The show also consists of a sinister clown and a lame ringmaster, Mario Ferreira. Unfortunately,before the show starts, Mario does a boring ring toss routine that included audience participation. The set list was the same for both shows I witnessed. Along with the aforemnetioned, the show also included 2 aerialists, a set of 6 dancers, fire breathing performers and random acts of juggling from the ringmaster.Some technical problems and various other errors accompanied the first show. The second show seemd to flow more smoothly with one obvious mistake that also took place the night before. Dee Snider didn’t learn from night one’s mistake as he again fouled up by forgetting the words to the Scorpions anthem “Rock You Like a Hurricane. I thought he would have studied up by making sure he got it right for the Friday show, but I was wrong. However, the show was successful in incorporating what the deacde of decadence was known for, scantily clad women dancing to an array of rock music.

The musicians were very interactive with the audience and at times, Corabi came out and sang with different members and even sat on one girls lap during “That’s Life. Dee did the same as he ran up and down the aisles (blonde hair flowing) during various songs including his own bands signature song “We’re Not Gonna Take It. Before the Judas Priest classic “You Got Another Thing Comin,” they pulled out an audience member to play along on Guitar Hero right on stage with them. That was very cool to see due to the popularity of that game and they were able to show their stuff to everyone on stage and the crowd as well. For the people who grew up in this era, it is something cool to go see and appreciate what once was. I’m sure that the members of the audience who were there because they had free tickets from the casino or who didn’t grow up listening to this genre of music probably weren’t impressed.

Tickets ranged from $36 to $86 dollars for the show, possibly a bit too pricey during these harsh economic times seeing they played to half packed audiences both nights I was there. I really hope they fine-tune the show and work out the kinks because I think the concept is great, but performing a Vegas strip style setting is another. 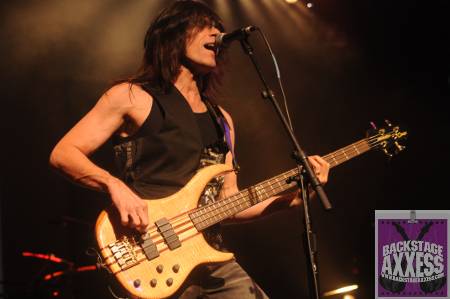