This year was the 15th anniversary of Vans Warped Tour. This tour is different than many, in the way that it features over 50 bands on 7 different stages for an all-day experience. The genres of these bands range from punk, screamo and metal to ska, electronic, and pop. This wide range of music, scheduled in one day, is what makes Warped Tour as successful as it is. Warped Tour has a known reputation for bringing out lesser-known talent and bringing them the mainstream attention they deserve. In earlier years of the tour, some of the bands featured were No Doubt, Sublime, Fall Out Boy, Blink 182, My Chemical Romance, and Green Day. These bands stand to prove that Warped tour is a great kick-start for any band.
At the Buffalo area stop of the tour on July 16th, the air was filled with excitement as the doors opened and music started to play. The crowds flooded in to get to the schedule board, or to buy their own paper copy for two dollars. This is Van’s way of keeping the fans organized as to which bands are playing on which stage, and to see when important signings or meet and greets are happening. Some of the bands playing on the Main Stage this time around were Warped Tour veterans NoFX and Bad Religion. Even Big D and the Kids Table have joined the tour once again. Other popular bands were Flogging Molly, Anti Flag, Less Than Jake, Madina Lake, and Aiden. All these, as well as up-and-coming bands like 30h!3, Black Tide, and Brokencyde, made the line-up of bands that much more interesting.
Being only my second year attending, I came expecting at least the level of energy I experienced in 2007, and I was surprised to find a new level of insanity all together! Newer bands would walk right up to you and ask you to sample their music or look at their merch, while other bands played and enticed passers-by to join in. While in the audience of bands like Aiden or Escape the Fate, one would have to be careful of getting sucked into a mosh pit or of getting hit by a crowd surfer. Someone even broke her leg during A Skylit Drive’s set. Craziness was the name of the game that day and it took no prisoners. Despite which band you were seeing, you became involved in the concert experience as both a whole crowd and an individual.
Van’s Warped Tour is always a very social tour in how both the fans and the bands are simultaneously walking the grounds. Meeting your favorite band, when it comes to this tour, isn’t as hard as you would think. I met local bands and newer bands, both of which were really nice and friendly to all those passing by to say hello. Most where helpful enough to give me directions, and some even joked about the concert directors starving them when they saw my pretzel in hand. I even walked by the guitarist of Aiden without noticing until he had walked out of site. I also made some new friends with fellow concert goers (thanks to my pink hair). Many punk hair styles were on display, including colored mohawks and tall spikes, and yet people were friendly enough to come up to me and start talking about my hair. That’s one of the great parts of Warped Tour, everyone is there for music and a good time, so it’s easy to find a few new friends if you’re willing to stop and chat.
My personal highlights of the day were getting to see NoFX on the Main Stage and Big D and the Kids Table on the Hurley.com Stage. Both have played on the Warped line-up multiple times and were great entertainers and crowd pleasers. NoFX showcased all the loud and rude punk attitude they have been known for, while still being comedic and personable. Big D and the Kids Table were the most entertainment I’d seen all day. They kept the energy level on the top notch as people danced to their ska punk and reggae vibes. The back-up singers had matching Betty Boop type outfits and all the performers in the band had their own spotlight at one point or another. They truly understood the art of a live performance and got everyone on their feet.
I was also lucky enough to see both Aiden and Madina Lake on the Ernie Ball Stage. Both bands have a harder sound than the previous mentioned, but put on an equally entertaining show. Both wiL from Aiden and Nathan from Madina Lake were crowd surfing at one point, and wiL even started a mosh pit of his own after making the audience clear some room in front of the stage. Even as crowd-surfing kids were flooding towards the body guards, Nathan made sure to give them all high-fives for their efforts. This shows the true mentality of both bands, that they are willing to participate with their fans in order to give them the full concert experience.
Vans Warped Tour 2009 was an over-all success. The bands brought their A-game, and the fans brought their endless supply of energy. I certainly went home happy, and I doubt anyone else had any negative thoughts on the show this year… except maybe the girl that broke her leg. 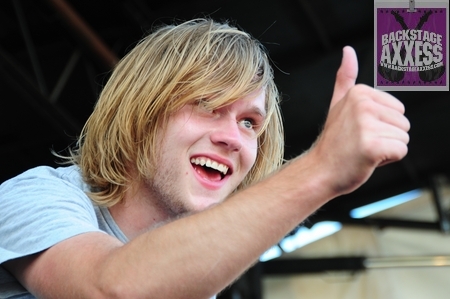 Many Thanks to Chelsi Shriver of MSOPR for allowing us to cover this all day event!