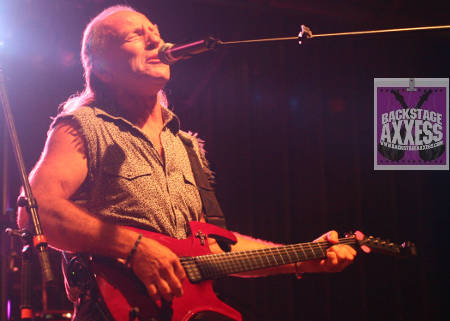 Backstageaxxess.com had a chance to sit down with the legendary Mark Farner, formerly of Grand Funk Railroad, before the RPM show at Willow Creek Winery, on Saturday September 12, 2009, in Silver Creek, New York. Here’s what Mark had to say:

Dee: What do you think of Willow Creek Winery ?

Dee: Its been 3 years since your last solo effort; For the People was released. Do you have any plans to release new material?

Mark: Absolutely! I’m working on it right now. There’s a video and a CD coming out yet this year called “Hot Girls.” It’s gonna be about some hot girls, baby!

Dee: And when do you plan on releasing that?

Mark: It’s going to be in November. That will be on Rockville Records. Look for it on www.markfarner.com

Dee: You made a transition some years back when you were doing Christian music and you were even nominated for a Dove award.

Dee: How was the transition from rock-n-roll legend to Christian rock?

Mark: It was pretty cool. Uh, except, you know, I thought I had to go to Church to meet God and all this stuff. ‘Cause I was this sinner in the world and I had to go into the Church and do all this stuff that you do. I did! I went through that whole scene and learned a lot. Talking about the perfect love that I know exists. The unconditional love. Uh, that love they’re talking about, you gotta do certain things to acquire it and salvation. You gotta pray this prayer and do this and all that. I don’t believe in none of that anymore, because the spirit showed me that love is perfect and unconditional. We’re all going to the same place and it’s the same place that babies come from. Is there anything wrong with babies when they get here?

Mark: There’s gonna be nothin’ wrong with us when we leave here neither, baby!

Dee: It’s been forty years since you performed your first concert with Grand Funk Railroad. What’s it like reflecting on that?

Mark: Well, I’ll tell you what, I’m proud to be suckin’ air today. Just suckin’ air is good. But playing music, and still doing these songs in the same keys, now that I’m diggin’ on. My kids, my grandkids, you know, they like Grandpa, they like Dad being up there and being a rock star.

Dee: How many grand-kids to you have?

Mark: I have four. Two girls and two boys.

Dee: You were recently presented with the key to the city in your hometown of Flint, Michigan.

Dee: How did that feel?

Dee: How would you feel if you were inducted into the Rock and Roll Hall of Fame?

Dee: Would you be able to share the stage again with Mel and Don?

Mark: No problem! It’s forgiveness. Love is perfect. If somebody’s got a problem, they’ve got a problem. It’s not my drama. It’s somebody else’s drama. They can just deal with that and I’m just gonna be me.

Dee: Do you have a current relationship with them (Mel and Don)?

Mark: Only in the courtroom.

Dee: You have also contributed to Rock and Roll Fantasy camp. Will you be doing that again?

Mark: Absolutely! I’ve done eight camps and I will go back and do more. I love being with the fans. I love hearing their stories. I love the love that they give back. When they’re sitting there across the table from you, eating lunch, and you burp…they go “Damn! He burped! He’s real! He’s a real person!” I’d hate to see what would happen if I lift my leg up…I mean to scratch (we laugh).

Dee: You’ve also been involved in a charity called Classic Rock Cares, benefiting the John Entwistle foundation. Will you be doing more with that?

Mark: Absolutely! I am on the board of the Entwistle Foundation. Proud to be there! Good people, good hearts and I like hanging out with good people that are doing things for the right reason.

Dee: Excellent! Any plans on when you’ll get back to that?

Mark: No. But my wife, who is my road manager, has been in contact with them because they’re talking about doing some more gigs down in Florida.

Dee: Can you tell us a little bit about the members in your band?

Mark: The Energy Band! My drummer, from Memphis, Tennessee, Hubert Crawford, played with James Brown, The Bar-Kays and The Eric Gale Band. He is a rock/funk drummer that kicks my ass across the stage and that’s what I need. I yike it! The bass player, Lawrence Buckner, from Jacksonville, Florida, has been with me since 1985. We’re brothers! It’s all about the love and we have a relationship. We all enjoy being with each other, but playing music together, that’s like, forget it! My keyboard player, Karl Propst, is from Atlanta, Georgia, and he is a piano playin’ fool! That man can play up a storm on a calm day. We love him! Everybody sings their asses off, they’re all lead singers, and so when they’re doing backgrounds for me, I’m like, come on!

Dee: What can the fans expect to see tonight?

Mark: Some Grand Funk music, some Energy, and a lot of guys up there that don’t play together all the time, but when we do, we think it’s special. We love each other. We like being around each other.

Dee: That’s awesome! So the tour is going well for you?

Mark: Yeah! Because it’s coming near the end of summer. I’m sorry, but this one’s gonna have to get over.

Dee: Besides your new album in November, what can we expect from you going into 2010?

Mark: More music, more music and more music. The Rock Patriot is still hangin’ on to the stars and stripes and I might go down with the ship, but I’m hangin’ on. I appreciate it Dee!

Dee: Thank you very much for talking with us at backstageaxxess.com. Is there anything you’d like to add?

If you want to know more about what Mark Farner’s up to these days, go to his website at www.markfarner.com