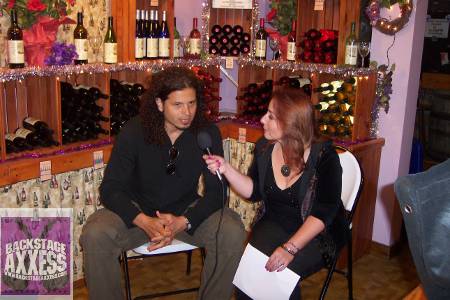 Jeff Scott Soto is a talented vocalist who, in addition to his solo efforts and work with the Talisman, has migrated among many well-known bands for the majority of his career. He has successfully fulfilled front man duties for Yngwie Malmsteen, Journey and more recently continues to tour as a member of the Trans Siberian Orchestra. Other credits include providing solid background vocals throughout the 80s for an array of popular artists and appearing on the soundtrack to the movie Rockstar, contributing lead vocals for the fictitious band Steel Dragon. I sat down with Jeff as we enjoyed the relaxed atmosphere of the Willow Creek Winery, located in the rural town of Sheridan, NY. He was as modest as he was energetic, and although he could not confirm nor deny the possibility of replacing Paul Rogers in Queen, he did say that he is more than eager for the chance to step up to the mic, and would be honored to do so.
Just before joining his counterparts on stage for the Rock & Pop Masters tour, Jeff was happy to spend a few minutes with me which resulted in an upbeat and fun conversation. Could it be attributed to the free flowing spirits that the gracious staff of the winery provided us? Its possible, and in my defense, I dare you to try and say Willow Creek Winery (three times fast) after enjoying a few sips! In fact, if you happen to have a bottle of vino handy, pour yourself a glass and join us wont you.

For more information on Jeff, you can go to: www.jeffscottsoto.com.