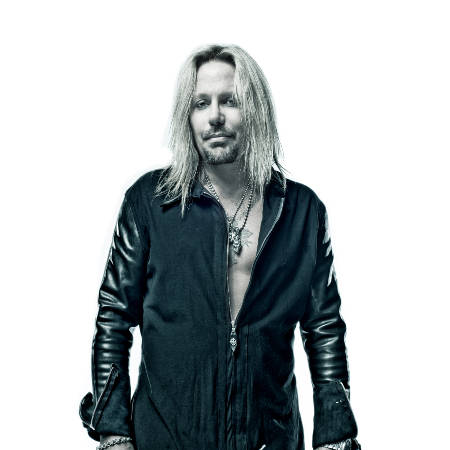 You may think of Motley Crue singer Vince Neil as one rock and rolls most notorious frontmen, but he is much more than a singer now-a-days. Vince is one of the more charitable musicians on the planet. He is also getting ready to do some dates with his solo band. Backstageaxxess.com recently talked with Vince and got the low down on his ventures, including the Feelgoods Bars, the Vince Neil Inks he owns and his upcoming solo album. We also talked about the future of Cruefest 3 and his current relationship with Mick, Tommy, and Nikki. Lets kick start this thing into motion and get this thing going.

Gus: You’re doing a bunch of solo dates, including a show at the Westbury Theater on November 25th. What songs can the fans expect? Will there be songs off of Exposed or Carved in Stone?

Vince: We do a little bit of everything. We don’t really have a set list. Obviously, we do some Motley Crue hits, some obscure stuff that Motley never plays, some stuff from the Exposed record, and some cool cover songs.

Gus: So it does sound like its a bit of everything.

Vince: Yes, a little bit of everything. Its all about going out and having some fun!

Gus: Will there be a possible solo CD with you and your band?

Vince: Actually, we are going into the studio in about 3 weeks. We should have the first single out by January and the album should be out by March.

Gus: Can you tell us a little bit about the album?

Vince: Right now its called Tattoos & Tequila. Its a rock and roll record! What else can you say?

Gus: So the fans can expect something in March is what you are saying?

Vince: You will hear the first single Tattoos & Tequila’ in January so just a couple of months.

Gus: Great! We are looking forward to hearing that. Right now, Motley Crue just released a greatest hits package this month. What is different in this release from greatest hits releases you had in the past?

Vince: I don’t know. I’m actually looking at it right now. The only differences that I can see are a couple of tracks from the Saints of Los Angeles album. * Publicist chimes in and adds there is a new Animal in Me remix by James Michael who produced the record.

Gus: You are so busy with many different ventures and I can go on and on about Vince Vineyards, Tres Rios Tequila, Feelgoods Bar, Vince Neil Ink. Any plans on opening up a future Feelgoods Bar or Vince Inks in the northeast?

Vince: The first Feelgoods Bar opened up in West Palm Beach in Florida a couple of years ago and one just opened up in Vegas. Also, we just opened up a Vince Neil Ink at the Rio Casino in Vegas. Im in talks with these people that actually put out or continue to help businesses put out more. I’m planning on doing another 15 Feelgoods next year and another 10 after that. We are looking at a spot right in Manhattan that we are probably going to put in within the next year. Chicago is coming up. The smaller cities, Im not sure yet, but we will definitely keep you posted.

Gus: Well, if your Rock and Roll career ever takes a turn, you have plenty to fall back on (laughs)!

Vince: I have Tequila, my bars, and getting tattooed. Its all good (laughs)!

Gus: Going back to Motley, are you still doing the film adaptation of the book The Dirt?

Vince: Well, we were never doing that. Its been out of our hands for years. Paramount pictures bought the rights to that as soon as the book came out. That was up them to make the film. They were going to make it and Director David Fincher was attached to it at one point. The president of Paramount, Sherry Lansing, left and it was her baby. Once she left, it kind of fell through the cracks. We are not movie makers so its been out of our hands and we have nothing to do about it or say about it. If it gets made, great! If it doesn’t get made, great!

Gus: So its just sitting there basically?

Vince: Yeah. Its sitting there on somebodys desk in Hollywood.

Gus: Motley just completed a very successful Cruefest 2 this past summer. Rumors have it that you guys are taking a break next summer. Is this true or whats the status of it?

Vince: Motley, as far as I know, is on an indefinite break. There are no plans to do anything as far as I can see.

Vince: We always have gotten along.

Vince: Everything is always good! The press has made more about things than anything that ever was. Jesus, you have relationships with people for 30 years, you are definitely going to have fights.

Gus: You can put Aerosmith in there right now.

Vince: That’s just the way it is. The nature of it ya know? We talk on the phone and stuff, but I live in a different city than those guys and everybody has their own lives.

Gus: Can we expect a Cruefest 3?

Vince: Maybe? I don’t know. There is nothing planned right now.

Gus: I read something somewhere about you possibly doing a reality show. Can you tell us the status of that?

Vince: There are always offers to do those types of things. Nothing is on the books right now.

Gus: Can you tell us about the Off the Strip poker series you are involved in?

Vince: Its my tournament that I just had last week, actually, last Sunday. It was in conjunction with the World Series of Poker. It was last Sunday, which was the day before the last 2 guys played. It was my 5th year in Vegas. Four years at the Hard Rock and I just changed it to the Rio for the World Series of Poker. We raised $250,000 for the Skylar Neil Foundation. It was one of the many things we do to try to raise money for charities.

Gus: I think that’s great what you do regarding raising money for charity and we continue to wish you nothing but future success in doing this and all your ventures!

We would like to thank Bailey Vance of 10th Street Entertainment for setting up the interview with Vince. For more information on Vince and his upcoming solo dates, you can go to: http://www.vinceneil.net/. For more information on the Skylar Neil Foundation you can go to: http://www.skylarneil.org/index.html. Backstageaxxess.com are also giving away tickets to the Westbury Theater show on November 25th, 2009. Go to: http://rgv.d0d.myftpupload.com//index.php/component/content/article/1-home/153-vinceneiltix for more details.