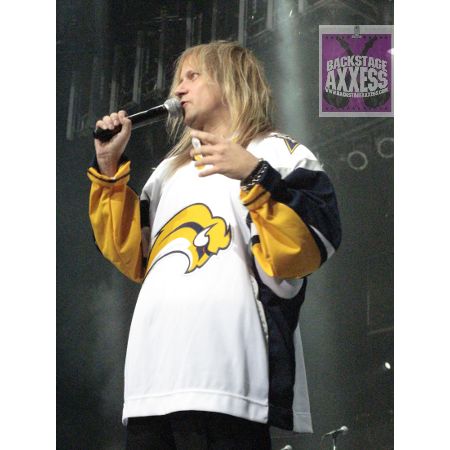 The Trans-Siberian Orchestra made it’s annual stop in Buffalo for two holiday performances at HSBC Arena on Wednesday, December 30, 2009. TSO performances are a holiday tradition for many with a portion of proceeds from every show being donated to a local charity. Just before the show began, it was announced that proceeds from the afternoon performance were donated to the Leukemia and Lymphoma Society.
TSO’s classically influenced combination of progressive rock and symphonic metal made for a Christmas Rock Concert to remember. The band, featuring numerous artists, hit the stage at about 3:25 PM for the matinee performance. The show began with brilliant lights and booming sounds to captivate the audience from beginning to end. This band is a treat to the eyes as much as to the ears with well choreographed movements of lights, sounds and musicians.
The band opened with “Night Enchanted” and albeit afternoon, inside the arena, a night enchanted it was. An elaborate backdrop of stars twinkled at the snap of fingers and some two-and-a-half hours of magic was quickly underway. During “First Snow,” sudsy snow began falling from the ceiling and was beautifully embraced by the colors of dancing laser beams.
About halfway through the show, following an epilogue that ended with a hearty “Merry Christmas and Happy New Year” from the narrator, the lights came up and guitarist Chris Caffery graced the stage wearing a Buffalo Sabres jersey. He introduced the band, including TSO’s co-creator, Buffalo’s own Bob Kinkel, who plays keyboard and is the Music Director of the band. The audience cheered with pride upon his introduction. Caffery then stated that some area string players were also in the mix.
Without further ado, part two of the show began with a treat as some material from the latest release “Night Castle” was performed. Caffery also announced that TSO’s first non-Christmas tour is set to begin in the Spring. Violinist Anna Phoebe rocked the crowd with animated movements and intense energy. There was fire streaming up from the mainstage and also from the back of the arena, where the “Queen of the Winter Night” appeared and filled the arena with her operatic vocals. Also, in true rock concert fashion, a drum solo was later featured. “Carmina Burana” was performed in Latin and as colorful fire again lit up the venue, a “Christmas Jam” brought several band members to the back of the arena. They walked through the audience and “jammed away” as Chris Caffery and others rose into the air on a tethered stage behind the soundboard to give the fans in the back a bird’s eye view.
As the band members returned to the mainstage, again traipsing through the audience, “Christmas Eve/Sarajevo” wrapped up the extravagant show. Wow! After two-and-a-half hours and some 30 pieces, I don’t know how they had the energy to pull off the evening show, but I heard that it was equally impressive. Plus, after the evening show, the entire ensemble came out and singed autographs. A great way to keep in touch with your fans who obviously keep coming back for more and more.
Set List: 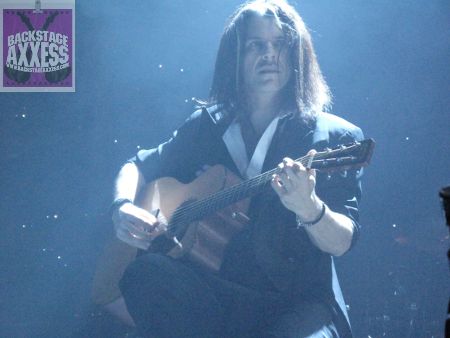 We would like to thank Kaitlin Lindsey of Cataldipr for allowing Backstageaxxess.com to review this years show. For more information on TSO, please go to: http://www.trans-siberian.com/.