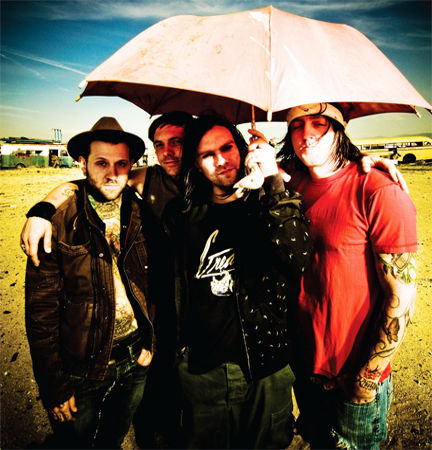 During their current tour, The Used stopped in Niagara Falls for a show. While they were there, I stopped backstage to get their view on everything from inspirations to on-the-road life. I was lucky enough to snag a quick interview with Quinn Allman (guitar) and Dan Whitesides (drums) and had a blast with these down-to-earth rock stars. It was really interesting to see their view of their fans and fame in general. So read on and see for yourself the crazy world of The Used…

Jade: You’ve been asked this before, but what was the deciding factor for changing producers this time around, instead of turning to John Feldman again?

Quinn: We just wanted to do our own thing and go in the studio, just break it down and do something new. It was just time for us to do something different, to change things up. We want to have more control. John Feldman’s fairly hands-on, so we just wanted to have someone who was laid back a little bit.

Jade: You’ve said in other interviews that Artwork feels like you’re starting over. Does this mean you feel your sound as a band is different on this record?

Quinn: No, not really. It’s not really to do with John Feldman, or necessarily a producer. It’s just like, where we’re at, we wanted to do it for ourselves, I guess. I mean, we had new management, we had to kind of start over, but for ourselves. And it was just the right thing to do at the time.

Jade: I’ve personally grown up with your music. What is this like for you? Do you feel empowered, or like a role model for your long-term fans?

Jade: As you’re back on the road, what has your touring routine consisted of? What do you do on the long bus rides?

Quinn: Party (laughs)! That’s it.
Dan: Yeah, we party, we sleep, we eat. Tons of video games, Jeph plays lots of video games. We watch a lot of movies. But usually when we’re driving, like when we start driving, we’re either drunk or going to get drunk. And then we go to sleep and then we wake up and we’re where you need to be. The time I woke up today was 2:30, but I also woke up at 7 in the morning and watched a movie until 9 and then fell back asleep until 2:30pm.

Jade: Dan, you’ve been working with The Used for two albums now, even before you were an official member of the band. How do you think you’ve made a contribution to their sound? Is your style similar to the rest of the band?

Dan: Well, my contribution is probably just an equal contribution. I mean, we all have similar tastes in music, and I think I fit in pretty well and I think the band’s happier than it’s ever been. So, with helping write the records, like when I helped with “Lies for the Liars,” it was definitely a lot different than “Artwork,” just because I wasn’t in the band and it was all new to me. It was kind of stressful. So by the time we got to “Artwork,” it just flowed easily.

Jade: Which do you prefer, outdoor music festivals or your own headlining tour? Why?

Quinn: I like a longer time slot. I like an indoor, intimate thing. Not necessarily more than the outdoor thing, ’cause that’s kind of fun, and it’s different. It’s kind of edgy, but it’s kind of nice to play music for longer.
Dan: The cool thing about outdoor festivals, too, is that you can go around and check out other bands and shit. And it seems like you get a little bit more time to do your own thing, but headlining tours are always, at least for us, better.

Jade: Is that why you created the Taste of Chaos? Sort of like an indoor Warped Tour?

Quinn: Yeah, pretty much. That was kind of the concept, I guess.

Jade: If The Used were to end, what would you do? Would you continue in the music industry? Would you go to college?

Quinn: I’d still stay in music. I’d still be playing music, for sure. Yeah, it would be music, and maybe something, maybe it would be photography or video or other things along the way, but it’ll always be music.
Dan: True that!

Jade: Your band is great at keeping up with their fans with your Youtube page, Kyte and Twitter accounts, and multiple signings. Why is that connection so important to you?

Quinn: It’s awesome, it’s really important. We have tons of fans that are really, I don’t know, that’s who we owe everything to, really. It’s sweet that people care and that we have a following. It’s cool.

Jade: What is your basis for music videos? How do you decide what ideas to go with? Which one is your favorite music video so far?

Quinn: We just will kind of whip up an idea together of what we feel of the song, where it’s going. Like sometimes, Bert and I will just sit down, like on our last video, “Bird and the Worm,” and “Pretty Handsome Awkward,” we collaborated with Lisa Mann, the director. So we all talk about it and fine tune the idea. My favorite is maybe “Blood on My Hands,” I think it’s pretty sweet. I like “Bird and the Worm,” it’s, I think, our best video.

Jade: What is your favorite perk to being a musician?

Quinn: To play music. Just to be able to jam with your friends, to get to travel around and do cool shit, it’s pretty cool. I like all of it.

Dan: Yeah, honestly, just to get to play every night for the people that show up. The amount of people that show up, that’s just like the highlight of the day. You just wait all day to play for that hour-and-a-half. That’s the best feeling. Yeah, and you get the bonus of traveling all over the world.

Jade: Which place is your favorite?

Dan: Yeah! Japan is always cool. We were just there and it was cool.
Quinn: Yeah, Jeph does. Japan’s cool, we like it.

Jade: What is your biggest inspiration towards songwriting?

Quinn: Yeah, I think that it comes from everything in life, almost like looking at life like taking snapshots of everything. Inspired by everything, you know, the drama that goes on, the soap opera of life. Everything that happens inspires me to try to put that down.

Jade: When all is said and done, what one thing makes you the happiest (besides music)?

Dan: My dogs, my family. But that’s just not good enough. I need the music too.
Quinn: It would be home, and just a place to relax.
Dan: Space, maybe a little space. Privacy (laughs)!

Jade: You, as a band, have been through a lot of tough times together. How has this affected your bandmanship and writing? Does your understanding of each other help in your song process?

Quinn: Gosh, yeah. That’s a good question. I mean, we all kind of vibe off each other all the time. And if we’re all having a good day or something, and there’s something we’re all connected to, the show will just be great. And I think when we write, everybody contributes equal, unique ingredients all the time.

Jade: You’ve toured with Atreyu before, were they your go-to band for this tour?

Jade: Your song “On My Own” from your first record has so much raw emotion in it, as well as other select songs from your repertoire (such as “Kissing You Goodbye”). What brings this intensity out of you? How do you get in the state of mind to write those types of songs?

Quinn: The way they sound is kind of like, you know, they’re kind of like a sentimental, deep… I don’t know how to put it. Just that feeling, that rhythm, I don’t know where it comes from, actually (laughs).

Dan: I think Bert writes a lot about, I mean, as far as lyrics and vocals go, it’s really personal. Like, the meaning of the songs, any song, might mean something to me, or to somebody else, but to Bert it’s probably something completely different. Bert’s one of the more unique writers because he writes really personally.

Jade: Their personal, but still relatable.

Dan: Yeah, when I think of people really listening to the words, I mean, that’s why I think we have such a die-hard fan base, is that they know that.

Quinn: It’s kind of like those songs, they’re not really there to give you an idea what it’s about, it just makes you thin, and then it’s up to you to see that picture for yourself. They’re sort of, like, empty for interpretation, it’s pretty cool. Bert’s an amazing writer.

We would like to thank both Dan and Quinn for taking the time to talking to us. For more information on The Used, you can go to: http://www.theused.net/