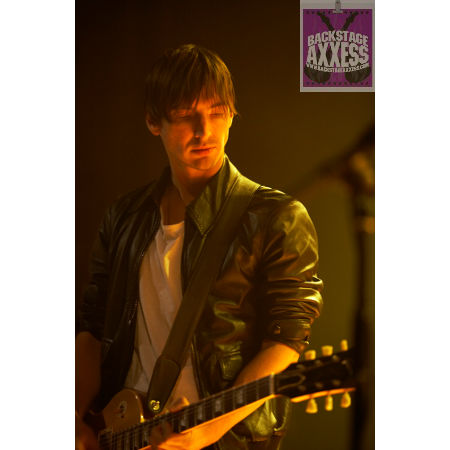 Jet, you know the name, sound, and songs. Whether you love them or not, you know of them, and it’s pretty amazing how a little band from the States’ far off neighbor, Australia, could have gotten this big and well-known. So what about their beginnings? I had the chance to talk to Cameron Muncey, the guitarist, all about how he personally got into music and what the music scene is like down under, and how their fans here differ from over there. Care to know more about the inner workings of Jet? Read on…

Jade: How did you get into music? What were your influences while growing up?

Cameron: Well, growing up, my brothers sort of introduced me to a lot of different stuff. And when I was a kid my mum always had The Beatles and Cat Stevens and stuff like that on the radio. And then my brothers introduced me to some early AC/DC and Beastie Boys, and then, finally I found Jimi Hendrix and things like that. When I first picked up the guitar I just liked to make a lot of feedback, so that sort of like, worked for me. So just like, the guitarists that made a lot of feedback like Jimi Hendrix and Sonic Youth sort of inspired me to make a lot of noise. And then finally when I joined the band, there where a lot of Australian bands at the time, and we just used to cover their music. There’s a band called You Am I, which we listened to a lot and covered a lot of their music. So that was definitely a huge influence, you know, as far as song writing. And yeah, a lot of bands through the years, I mean, you don’t really stop being influenced by what you hear, you know?

Jade: What is the music industry like in Australia?

Cameron: Well, I mean, it’s pretty healthy, you know. We have bands in Australia that are really, really huge in Australia and not so much internationally, but they’re huge in Australia and have major followings. And then you’ve got bands that go out from Australia, sort of like us, or over the years there’s been lots of different bands, like, Empire of the Sun is another one, and they go on to have international success. So it’s like two sides of the same coin, and that happens a lot. And also, we’ve got a big festival season, in the summer everyone goes to festivals, and really healthy rock and roll festivals have been going on. Each city has lots of different bands and Melbourne, especially, has a lot of venues, a lot of places for bands to play and go out. So I would call it healthy. And there’s a lot of music being made all the time. Not necessarily being taken notice of in the States because it’s so far away. It sort of makes it it’s own flavor, it’s own thing, bec

ause we’re so far away.

Jade: What’s the difference in size of crowds you pull in between here and Australia?

Cameron: I don’t know, they’re both good in their own way. I think Americans are more likely to hang back after the show for like two hours and wait for you and then get you to sign autographs. Maybe because we’re Australian, over there they think, “Aww, we’ll see them next time,” but over here they make an effort to hang around and say hello and get things signed and all that. So I see that a lot more here, definitely.

Jade: Does that ever freak you out, when they come backstage?

Cameron: Depends on who it is, I mean, some people are really cool and we like to be good to our fans, like give them a drink or whatever. Because we like to just normalize everything, because in the end, everyone’s just people, right? We just play music. And people know that anyway, our fans are pretty down-to-earth. Some people give you strange photographs and people give you things they’ve made themselves or pictures that they’ve drawn. It’s kind of sweet that people go through all that effort. You go, “Wow, you’ve put a lot of effort into this!” It’s funny for someone you never knew or have never met to do something that takes a lot of time and a lot of effort and put it into something for you. It can be slightly strange, but I think you get used to it.

Jade: What experiences have inspired you in your music writing? Like with the songs “Look What You’ve Done” and “Cold Hard Bitch.”

Cameron: I think “Look What You’ve Done” was written by Nick about how he felt when his family was going through some tough times. And the song, “Cold Hard Bitch,” I think it’s about anything, really. It’s not much brain power being used in the writing of that song, if you know what I mean.

Jade: What do you enjoy most out of what you do as a musician?

Cameron: Sometimes I feel like I’m not sure, when I go on stage, if it’s going to be great or not. I’m not sure, and then when it turns out to be great, it’s just a fantastic feeling, to be up on stage and to have this feeling that you’re totally in the moment, just playing, being in the band, and the crowds there. It’s just this energy that gets creative just by the friction of all those things happening at the same time. I definitely love that feeling and that’s the one thing I’d miss if it was gone.

Jade: Where has been your favorite city to tour in? And why?

Cameron: I think so, yeah. I mean, there’s definitely times when you have nothing to do. Like, I still haven’t gone out, or found anything to do in Baltimore. I’ve been there a few times and nothing’s ever happened. Except the shows are always good. But you know, there are certain cities that you just chill out, and there are other places you go out.

Jade: What is your recording process like? Do you have a set routine, or do you go with whatever ideas are brought up first?

Cameron: Well, it tends to work in the same way, just because of the necessities of recording things. We tend to do the drums first, then the bass, then the guitars, then the vocals at the end. We’ve done it the same way all three times, but I feel like you should always be changing things up in getting things down, so that’s definitely a goal.

Jade: And when you’re writing and recording songs, how does that work? Does someone have an idea and you work off of that or…?

Cameron: Yeah, that’s right. It would just sort of come from an idea and then we’d just work on it as a band or bring it to the band, which can be a slightly intimidating process to show everyone what you’ve done. You always have a feeling that you’re putting your neck on the line a little bit, you know, you’re showing a little bit of your soul for everyone and hope everybody likes it. So it can be quite intimidating sometimes, even now.

Jade: Lastly, what are your plans for 2010? Are you touring?

Cameron: 2010, Yep, touring. We’re in the States right now at the moment, then I think we’re taking April and May off just to write and stuff, see our families. And then after that probably touring in Europe, and then after that Australia and Japan. So yeah, just touring.

Jade: Alright, well, thank you for your time.

We would like to thank Brad Freiss of 10th Street Entertainment for allowing us time with Cam. For more information on Jet, please go to: http://www.jettheband.com/.