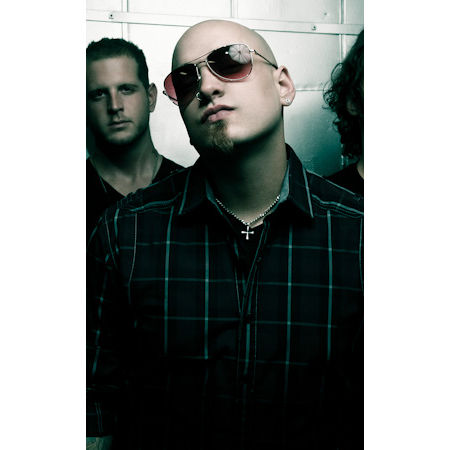 Following the release of their latest album “White Rabbit,” Memphis rockers Egypt Central have been hitting cities across the country delivering what lead singer John Falls calls “Kick Ass Rock.” I recently had the opportunity to talk with the Egypt Central front man during their stop in Louisiana, and discuss their recent album and the band’s unique dynamic. Read on and enjoy this wild trip down the rabbit hole!

TJ: So you guys are in Louisiana tonight, hows the tour going so far?

JF: Its going really well man! Its been awesome with the new record coming out and the response from the fans with the single doing really well on the radio. The growth from the last record to this record, as far as the size of the crowds, is huge. And at the same time, there’s new people finding the band everyday that are just now hearing us. It’s really cool man, and the bands that were out with are really awesome to tour with.

TJ: And how are the fans responding to the material from White Rabbit?

JF: I think that they waited a long time, and now that they’re getting it they’re like “man it was worth the wait.” As much as they wanted a new record they’re very proud of the work that we put into it. It’s awesome to share that moment because we’re really proud of it as well. We made sure when we went in to make this record that we put everything we had into this record and show the growth and maturity of the band.

TJ: You mentioned that the fans had waited a long time for this record. Do you think that the long break added anything to the band musically?

JF: Yeah the deal is some people know how old the first record actually was, some people don’t. To the national scene the record came out three years ago or there about. The reality is that record was made seven years ago and we were trying to get it out. There were people that found it online and independently,

and by the time we finally got it out nationally we toured for two years. Then we came off the road and it took almost a year to clean up some of the issues that we were having, changed team members and that. I think that naturally in life over that amount of time you change as a person. You grow and mature, and obviously you do the same thing as a musician. You change you grow, and you develop your skills better. I think that really shows in this record.

TJ: A break like that would wipe most bands off the scene. Was there anything that really kept you guys going during that time?

JF: The fact that the fans were relentless. They were like “hey guys where are you? Where’s the new record?” Also this is what we do, and we feel like we can do it at the highest level. So it was never an option to just give up, having gone through what we’ve gone through and having been broke apart with all our issues. We’ve seen so many bands just come and go. This is a competitive industry and you have to want it more than the guy next to you in order to move forward and to keep doing it. We all have an extremely high competitive nature so it works out really well for us.

TJ: And out of all these issues emerges the White Rabbit. When did Fatty Arbuckle (The White Rabbit) meet Egypt Central and when did the concept emerge?

TJ: Ironically all these issues birth great music! Now, how does the creative process work with Egypt Central?

JF: Well I mean its pretty unique. Youve got Jeff (James) who can do anything with guitar, and Blake (Allison) who also plays guitar and is an amazing drummer and producer, engineer and a writer. And you got Joey (Chicago) who is an amazing songwriter, as well as my favorite lyricist in the world, and extraordinary bass player. The team that we put together that is the backbone of this band is unbelievable at coming up with ideas. And not just putting together ideas but having a complete vault done and ready to be worked on at an extraordinary pace.

TJ: And I understand that you guys are a really tight band that has been living together for a number of years. How does that contribute to the writing process?

JF: I mean it’s impossible to be that close and not have the level of relationship we have with one another. If you can be that close to one another and still be friends [laughs] it says a lot about the individuals in this band. I mean it wasnt always easy; we’ve had a lot of growing up to do. We’ve definitely got our battle scars and had our ups and downs, but were all legitimately brothers. It has been one hell of a rollercoaster. It’s awesome that we’ve all been able to remain best friends and brothers through this wild and crazy journey we’ve been through.

TJ: Skid Mills also played a major role in the process this time around as well. What was it like working with Skid?

JF: Skid, obviously being the producer and song writer he is, pushes you. If you’re willing to take direction and listen and put in the hard work he demands of you then you will come out with a product you can be happy and proud of. He’s an awesome guy. He’s a thinker and most of the time you never really know what’s going through his head [laughs]. So when you do something that strikes a nerve with him, you will never see Skid just jump out of his seat. But we were actually able to get him pretty excited a couple of times on this album, and I remember Grant standing up and going you guys must be doing really good because Grant does not get that excited.” He’s a hard worker and a family man like the rest of us, and he’s awesome at seeing the song in completion before the first note is even recorded. So, I mean he has an uncanny ability to see the whole thing completed.

TJ: How did you guys end up brining Skid onto this album?

JF: We had known Skid for years from Memphis. We had been friends and he always talked about doing something together. When we were getting ready to start looking for producers for this record he was like well lets do some songs or some demos and just see what its like. Carrie and Blake went up there for a couple of days, and when I came up the first song I heard was “White Rabbit” and I was like ‘oh ok.’ [laughs]. That said a lot to me, and it was like bam, bam, bam one after another. It was a no brainer. Why would you fight the chemistry and the obvious creative process that was happening, and the rate that it was coming out was unbelievable.

TJ: After reviewing the album I got the sense it was one big story, a concept album if you will. Was that your guys intention or was it just something that just happened as you were writing the material?

JF: It didnt really even happen with writing the material. Each song is actually something that has happened. It’s something that we went through. They were all separate scenarios but just because of everyone being so close and just like living together for so long, experiencing similar things. Its the life that we’ve lived and its honest stories, and I guess that’s why it reads like a book. Because it is the book of our lives you know?

TJ: And the album is really full of a lot of dark emotions. How do those emotions translate in your live performances?

JF: From the first record to this record we really realized what we are live. When we come to the stage we want to capture that element, that live, raw power that we hit in the music and in the recording process. That passion, that thunder, that aggression that energy is in everything you know?

TJ: It seems like growing up in Memphis fuels a lot of your emotions as well, particularly on tracks like Ghost Town. Does Memphis play a major role in your lives and your song writing?

JF: For sure. Memphis is a hard town to grow up in, especially recently as everything has changed in the city. At the same time theres no better place to grow up in as a musician. People flock to Memphis because of Elvis, because of Beale Street, because of barbeque and the element thats there. There is such a culture there that also creates a competitive nature amongst the people that live there. Its really hard to get people to come to your shows and to take notice of what you’re doing as a musician simply because the guy pumping gas at the gas station can play guitar, and his neighbors can sing. Everyones a musician there. So, that being said, when we came out there was a lot of people who were like oh my god they’re blowing up thats awesome. At the same time it was half-hearted. As quick as we rose up, and then all the issues that we went through with the break from the first record to the second, a lot of people started running their mouth. Just hating on us and things like that. You really found out who your true believers are, and the statements to those people are were letting them know it doesnt matter what you say or do, were going to keep doing what we do and nothing is going to get in our way.

TJ: Well, aside from Memphis are there any other cities that you guys enjoy playing for most?

JF: Definitely Fort Wayne and Flint, Michigan. They were two of the first places we went outside of Memphis and we have a lot of friends and we’ve definitely developed a great relationship with the fans there. Its almost like were from there.

TJ: Are peopling coming out knowing Egypt central from the first album, or is it White Rabbit thats bringing them out?

JF: Its a combination. I think that there are a lot from the first record that were ready for this and we are proud to show it to people.

TJ: Well thats all the time we have for today but before I go is there anything else you would like to say to your fans?

JF: Just go check out the record and come to the show. Wed love to meet you!

We would like to thank Amanda Cagan from ABC Public Relations for setting up the interview with John. For more information on John and Egypt Central, please go to: http://www.egyptcentral.net/.