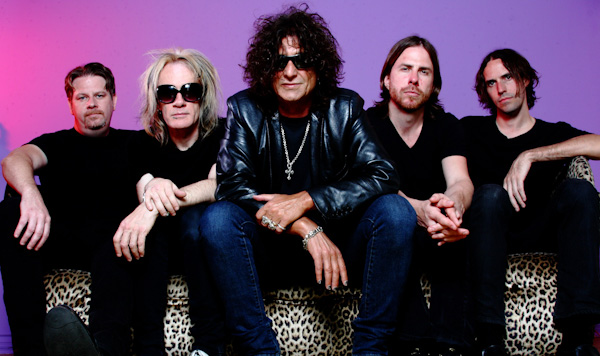 L.A. Rockers, Venrez, recently released their new CD “Sell the Lie” to the U.S. market. On the eve of the release, I had the opportunity to chat with Ven and find out about the new CD, their recent tour with Fuel, and how Venrez got its start.

KE: Hi Ven, thank you for calling in with us today.

Ven: Sure, no problem.

KE: I know you have probably been asked this before, but there is a really cool story of how Venrez got started. Would you share it with us?

Ven: It’s a really interesting story, it kind of happened by accident. When I was a teenager, 17 and a half, I was playing around with my vocal style. There was a rich kid, someone I went to school who had a drum kit and a rehearsal studio, one of my friends played guitar and another played bass. We started jamming around and about six or seven weeks and we actually started sounding pretty good. And then it just all fell apart. You know, nobody really had the wherewithal other than me to make it keep going and I got kind of frustrated and just kind of thought being in a band was something that would never happen, and I just moved on with my life. Then in the summer of 2009 I had a roommate who was a singer/songwriter and kind of an artist and we were sharing an apartment with a big sundeck and he had an idea to build a tiki bar out there and I said, sure go ahead and do it. And all these workers were coming over and I had no idea that some of them were very accomplished musicians including Jason Womack. He was the bassist for Juliette Lewis and the Licks for three and a half years and wrote quite a few of her songs. It became apparent pretty quickly and the building sessions turned into jam sessions. And you know the next thing we knew we put a band together. It came together pretty quickly. That was about July/August of ’09 and around October we did our first show at the Viper room.

KE: Well, that’s a great story. Did you ever get that tiki bar built or did that idea fall apart?

Ven:(Laughing) We got the tiki bar built but unfortunately the owner of the building won a war against us and we had to eventually tear it down. We got to enjoy it for awhile though.

KE: Oh, no! That’s too bad. So the new Venrez CD, “Sell the Lie,” debuts in the States tomorrow. What are your thoughts on that?

Ven: Yeah, we got the CD being officially released tomorrow. So we’re pretty excited about it.

KE: I had the chance to listen to it and I really enjoyed it.

KE: The band seems to have a great chemistry right from the start. Did you know right away that this was it? That this was going to work?

Ven: Yeah, kind of. We started the band and our guitar player, who has been replaced by Alex Kane, and Jason were writing the music and I just kind of felt like I wasn’t going to be right until I started writing my own lyrics and so I turned it over to Jason and we fired everybody and we rebuilt the band. And there is a reason why we sound like that and I’ll tell you why. Eddie Davis, our drummer, was the touring and recording drummer for Juliette Lewis and the Licks for three and a half years and Jason Womack who writes music and plays guitar in my band was her bassist. So those guys worked together for a long time and not only as a rhythm section but also writing songs and arranging songs for Juliette. Mike Bradford, our bass player, is a childhood friend of Jason Womack. They both grew up together in Jackson, Mississippi and those guys have worked together and written songs together since they were fourteen, and so most of the band has had chemistry for quite some time. You know go ahead and put me in as a front man and add Alex Kane and the chemistry works really well.

KE: I love the barebones, kind of raw sound on the CD. It’s something that you don’t hear very often today. Is the plan to stick with that live feel?

Ven: You know I think we will. I think we’ll keep that signature sound. It was the debut album with these guys and we toured Europe together twice and we wanted something that would really represent what we were about. Jason Womack wrote the music and he produced the album and we agreed to allow him to produce it before we recorded it. That was what he hoped to achieve and the band all agreed with him and we got together as a band and recorded it live. Alex Kane, our guitar player, who had filled in on the one European tour, I think he had one foot in and one foot out until we made that album. When he went into the studio with the rest of these guys and just saw the kind of real musicians he was working with, he really committed and that’s when the band took off. We did record it live together in there. I went in when the music was done and I did the vocals over about eight days. I sang each take from a to z. We didn’t concentrate on this chorus or that verse. We’d done the songs live many times and we all knew the songs. Vocally, I performed them quite a few times and we really got that live in your face sound. And we weren’t worried about getting radio hits. We wanted to put a stamp on who we were. You know, we went in there and we did our thing. We’re independent and we’re able to control our own destiny. We’re not controlled and manufactured by a label.

KE: The sound really brought me back to when I first got into rock music. I love the cover you did of Blind Faith’s “Can’t Find My Way Home.” Was there a reason you chose to include that on the CD?

Ven: Yeah, well there’s an Elmore Leonard movie that is going to be coming out in August. Elmore Leonard wrote “Get Shorty,” “Jackie Brown,” and “Be Cool.” The film is called “Freaky Deaky” and it takes place in 1974. So we had the opportunity to record a song for the soundtrack. And I always loved that song and it had to be a song that was on the radio in 1974. So we chose that. That’s why we covered it.

KE: I enjoyed your version of the song. It was a great arrangement.

Ven: Thank you very much. I think Jason came up with a really cool arrangement and I’m going in and singing it as a kind of laidback heroin Jim Morrison as opposed to that high tone that Stevie Winwood sang it and the other people that covered it. I think we achieved something really different.

KE: I agree. It was definitely a different take on it. Venrez just wrapped up a tour with Fuel. How did that go?

Ven: Wow that was an awesome tour. I’m still, I got home Sunday the 19th and I’m still on post-tour depression. It was just a fantastic tour, it really was.

KE: How did the Fuel fans react to the band?

Ven: Well, that was really interesting. The Fuel fans really dug us and we played to an awful lot of people . You know the week before the Super Bowl in Indianapolis, the uptown area is called the Super Bowl Village and they block it off. And Verizon put a stage in there and they had great acts all week. They even had the Village People. We went on with Fuel on Tuesday night January 31st. The Indianapolis Colts’ cheerleaders were our opening act. We played to over 38,000 people. That was one heck of an experience . It was just an ocean of humanity backed into the streets for miles. They had JumboTrons and bigscreens all through the city and that was quite the experience. And to the last show, which was at the Hard Rock Casino in Biloxi, Mississippi, it was absolutely jam packed. There were two or three thousand people there. Brett Scallions, the singer of Fuel, he came into our dressing room right before we were going on and said hey let’s do “Mary Jane’s Last Dance” and we were like ok and for the encore I went onstage and Jason came and took second guitar and played with Andy Anderson, the lead guitar player for Fuel. Our drummer Eddie Davis took over on drums. Alex Kane, our second guitar player, took over on bass and we did “Mary Jane’s Last Dance” by Tom Petty and it just rocked the house. It was one of the highlights of my career actually, just so much fun.

KE: It sounds like a great time. Any future tour plans?

Ven: Well, there are two bands were talking to right now. One tour would start on April 27 in New York and the other in New York on the 28th. I can’t mention who but we will definitely be on tour with one of those very soon.

KE: Awesome. It sounds like everybody has had a really positive reaction to Venrez live. I wish you guys nothing but more success down the road. Keep us posted on the tour and I appreciate you taking the time to talk with us here at Backstageaxxess.com. You are definitely living proof that it is never too late to go after your dream.

Ven: Absolutely. I think it sends a good message. Hopefully radio will come our way but if they don’t we’ll just keep on touring.

KE: Well, we will look forward to seeing you live.

Ven: We’ll absolutely be in your area, we’ll let you know and I’ll look forward to meeting you in person.

KE: That sound great! Thanks again for calling in and best of luck.

We would like to thank Chip from Chipster Entertainment for setting up the interview with Steve. For more information on the new CD “Sell the Lie” or Venrez in general, please go to: Venrez.