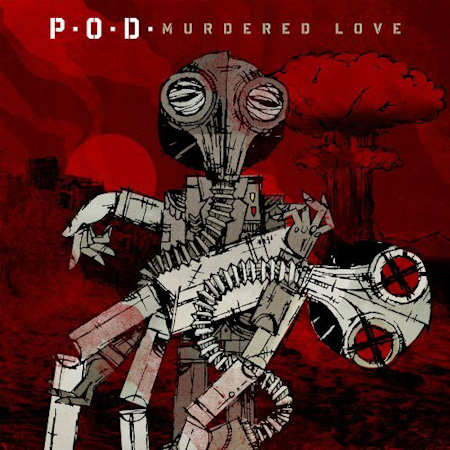 After taking a four year break to concentrate on their personal lives, Christian rockers P.O.D. (Payable On Death) are back and about to release their eighth album, “Murdered Love.” P.O.D.’s passion for their craft has always been at the forefront of their music and this new record is no exception. Through their energy and vitality, they do an amazing job bringing the songs to life.

“Murdered Love” is their most diverse record to date, mixing different styles from metal and punk to rap and reggae. Working once again with producer Howard Benson, they were able to blend these styles into a sound that is distinctively P.O.D. The record opens with perhaps their heaviest song yet, “Eyez,” which hits you hard and fast and features a cameo by Jamey Jasta of Hatebreed. The west coast rap influence is featured on the title track, “Murdered Love,” and the fun hip-hop of “West Coast Rock Steady” which includes an appearance by Sen Dog of Cypress Hill. Pure energy abounds on “On Fire” as lead vocalist, Sonny Sandoval, shouts “Stop,drop, roll, I’m on fire!”

For this record, P.O.D. has written all the songs themselves showing a lot of growth since their earlier work. Tackling more difficult subject matter, they have matured lyrically as well. The first single, “Lost in Forever,” questions the cruelty of life and the ballad, “Beautiful,” delves into the possibility of an afterlife. The album closes with the hard rocker, “I Am.” This track is heavy and dark, touching on the topics of suicide, rape, addiction, and self-worth.

“Murdered Love” is a terrific showcase of everything that P.O.D. has to offer. It has all of P.O.D.’s trademark energy combined with thoughtful and contemplative lyrics. Four years is a long time between albums but I’m sure fans will agree that “Murdered Love” was worth the wait.