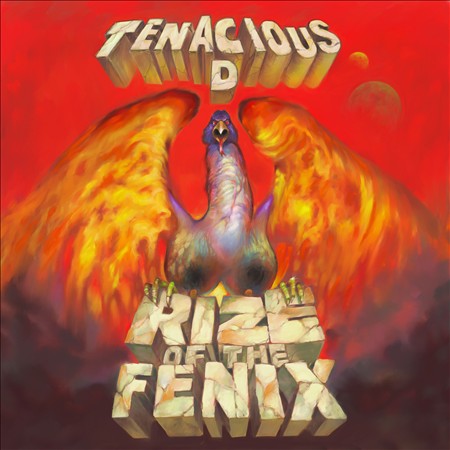 They’re baaaaack! The comedic, rock duo of Tenacious D has recently released their third album, “Rize of the Fenix.” After a six year absence, Jack Black and Kyle Gass return with their unique blend of comic absurdity and rock and roll.

From the giant phallus gracing the cover to the liberal use of the f-bomb, it is clear that the D are not afraid to offend. In fact, that is a big part of their charm. Tenacious D will poke fun at everything and anything including themselves. In the title track, they mock the commercial failure of “The Pick of Destiny” and question whether they, like the “Fenix,” will rise again to glory. Black’s storytelling and deadpan delivery are spot on. Whether singing about their quest for mediocre women in “Low Hangin’ Fruit” and the filthy and funny “39” or the death of real rock in “Rock Is Dead,” the D will have you laughing out loud.

“Deth Starr” is a light hearted romp with a real eighties rock feel to it and “Roadie” is a fun and ridiculous tribute to those working behind the scenes. Another solid track is “The Ballad of Hollywood Jack and the Rage Kage” which focuses on a fictitious fight between Black and Gass as Black rises to stardom. The simple acoustic guitars and vocals are not to be missed. One of the best songs on the album and my personal favorite is the teaser, “They F*cked Our A**es.” This song really rocks and the opening lyrics are offensively funny. At just over a minute, it gives us a small taste of how great Tenacious D can really be. Also included on the album are two comedy skits, “Classical Teacher” and “Flutes and Trombones.” While I didn’t find them exceptionally funny, it was good to see a return to the skit format from their debut record.

Musically, Tenacious D has never sounded better. Gass is quite the guitarist and the duo can pull off some terrific harmonies. My only complaint is that the slick production is a little overdone. For me, it takes away from the “loser” appeal of their earlier work. Whether or not “Rize of the Fenix” will resurrect Tenacious D from the ashes remains to be seen but I think they are definitely headed in the right direction.