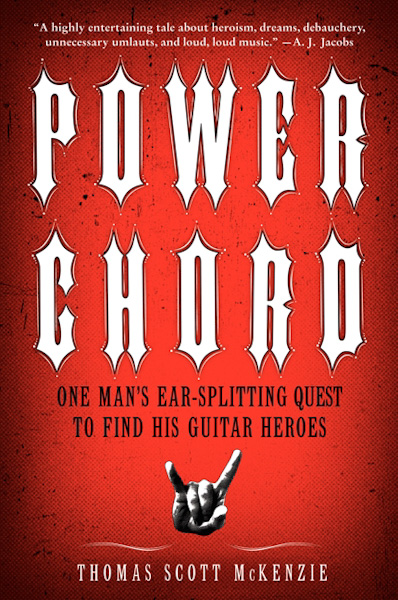 We all had childhood heroes that we worshiped. Maybe you were a sports fan and dreamed of shooting hoops with Magic Johnson. Perhaps you were a film junkie and wondered what it would be like to star in the next Tom Cruise movie. For Thomas Scott McKenzie, it was all about guitars and the guitar gods that brought them to life. In his soon to be released book , “Power Chord,” he takes us on an adventure of a lifetime as he travels the country seeking out those heroes of his youth.

Thomas finds rock and roll early on as he describes his childhood bedroom filled with Ace Frehley posters and his very first concert, KISS. It becomes obvious that he grew up with a strong passion for rock music and an even stronger passion for the guitar. Tired of his hum-drum job, Thomas finds inspiration in the guitar collection hanging on his wall and sets off to find those guitar gods he dreamed of becoming.

“Power Chord” is full of great stories. Thomas experiences everything from shopping with Bruce Kulick and taking a class with Steve Vai to the ultimate fantasy of his participation in Rock and Roll Fantasy Camp and playing onstage with Ace Frehley. He is inspired by the dedication of his idols and their love of the instrument, whether they are playing for 20,000 people in a sold out arena or to 20 people in a small town club. It becomes a journey of self-discovery as Thomas overcomes his fear and begins learning to play the instrument that has become such a big part of his life.

Whether you’re a fan of the guitar or of rock and roll in general, “Power Chord” is a quick and enjoyable read. By the end, it won’t matter if you can shred like Eddie Van Halen or barely finger a G- chord. Thomas’s message is clear. If you love it, get out there and play.