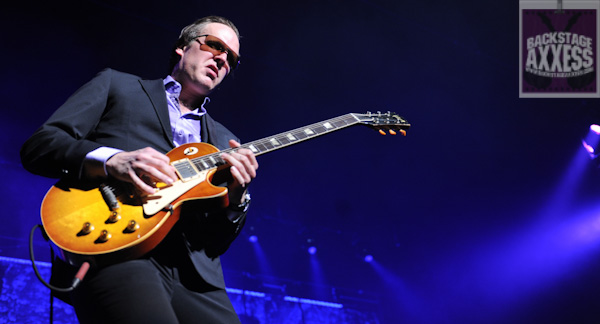 The first time I saw Joe Bonamassa perform was on May 26, 1990, just weeks after his thirteenth birthday, and he was opening for B.B King at the Downtown Festival Tent in Rochester NY. His guitar (which I am almost positive was a Stratocaster) dwarfed the youngster, and cynics wrote him off as a novelty act.

It was a short time afterward I met him when he headlined some shows at a nightclub where I was a bartender. His first scheduled performance was canceled when the labor department determined he didn’t have the proper paperwork to perform at a bar. We refunded the cover charge, but I kept the tips from fans who waited to see if the show would go on.

When he did play at Red Creek, there were many of us who were certain that the young boy was not just a novelty act, and years later it is simply astounding to see how far this young star has risen, as both a solo performer and in the critically acclaimed rock band Black Country Communion.

While I had a huge list of prepared questions, I let the interview go where it decided to go. When one is as familiar with an artist’s work as I am with Bonamassa, it’s hard to even know a starting point. Just as I had heard from someone else who interviewed Joe, in spite of his amazing talent, Joe is a humble guy and easy to talk to. I hope his fans will enjoy this interview as much as I did.

Thom: I’ll Start out by saying what an honor this is, I am one of the fortunate people that saw you open for B.B King at the Festival Tent in Rochester when you were twelve years old.

Joe: The Lilac Festival! That was fun, I remember that gig.

Thom: Maybe we could start there with your recollections of that show.

Joe: That was the first major gig in front of a lot of people. Before that I played The Red Creek Inn in front of a few hundred people.

Thom: And I was at both of those shows because I was a bartender at Red Creek, Amazing stuff, I’ll never forget it.

Joe: I have some fond memories from back in the days when I was “Smokin’ Joe.” It’s hard to believe I will be celebrating twenty four years as a performer this year. It’s insane to think I am only thirty five years old and I have been doing this for three quarters of my life.

Thom: I am sure you hear this a lot, but whenever I hear a new album I wonder when you are truly going to reach your peak. Everything is just getting better, even the live albums. When the “Beacon Theatre: Live from New York” album came out, I thought it was too soon after the live album from the Royal Albert Hall, and yet the Beacon Theatre album sounds fresh and exciting.

Thom: And I get the sense you are a student of your craft. You study the playing styles of the originators of the blues here in America but are also a student of the British Blues revival players, all of whom became your influences.

Joe: I’m still a student. I’m still a geek and experimenting with a lot of different sounds. I love listening to those old records and they challenge me.

Thom: There has been a lot said about your guitar playing but one of the things you don’t seem to get asked about is your vocals. One of the things I noticed on the “Beacon Theatre” album is the version of “Bird on a Wire,” which you recorded on “Black Rock,” and then a version appears on the “Royal Albert Hall ” album, and yet in a few short years the version on “Beacon” is just breathtaking. “Mountain Time” is another one that is over the top, you really have developed as a vocalist. Who are your influences as a singer?

Thom: Wow, Warren Haynes, never thought of that but you two have a lot in common vocally. I saw him this summer and he sings like a guitarist, expressing the notes like the guitar does, if that makes sense.

Joe: Yeah, it’s wonderful and I have always had a reverence for his vocals. Another guy who has that kind of ability is Vince Gill.

Thom: You were recently invited to play at an event honoring Chuck Berry. Was he one of your major influences or did you rediscover him when you were asked to perform at the event?

Joe: I saw “Hail! Hail! Rock n’ Roll” when I was a kid. It’s a great movie, I loved the Clapton stuff. When the Rock and Roll Hall of Fame called me to do this, it was the second thing I had done for them this year. The first thing was with Derek Trucks and the bearded one from ZZ Top (Billy Gibbons) when they inducted Freddie King, so that was a real thrill. They must like me because they keep calling me back! As far as Chuck Berry, music is cyclical, you get into fads and sometimes you don’t listen to a catalog for awhile. I knew this thing was coming up and it was about two weeks before the event I started learning some of the songs and revisiting the catalog. It’s amazing and I really began to appreciate his phrasing, his technique and his songwriting. It’s brutally complex for how simple of a form of music it is, and that really drove home what a genius Chuck Berry is in mind. If nothing else, I walked away with a sense that this stuff is a lot tougher than anybody gives it credit for, and Chuck Berry is an American icon. The event was one of those cool moments I will never forget.

Thom: They say every guitarist can play the opening lick to “Johnny B. Goode,” but nobody can play it like Chuck Berry.

Joe: Every guitarist can play a lousy version of a Chuck Berry song, nobody can play it the way Chuck did and a lot of that sound comes from his work with Johnnie Johnson, who was very underrated.

Thom: One last question. I interviewed Kenny Wayne Shepherd earlier this year and he talked about playing Jimi Hendrix’s famous Woodstock Stratocaster. He is associated with the Stratocaster, you are associated with the Les Paul, What Les Paul would you love to play, or have you played it? I know you have played some of Paul Kossoff’s guitars.

Joe: I’ve played the Kossoff guitar many times. Actually there are three of them, the stripped one that was painted black and nobody knows where it is, the Dark Burst, which is in the hands of a collector in the UK and there is one that a friend of mine in Newcastle owns which he is generous enough to let me play it whenever I am in the neighborhood. The closest thing for me happened last year at the Hammersmith Odeon when Donald Gallagher brought Rory’s Strat to play at the Hammersmith Odeon shows. It’s the beat up Strat, the iconic one. I put it on and I knew I was going to take a lot of crap for it, maybe the same thing Kenny went through for playing Jimi’s guitar, with people saying “who do you think you are?” The cool thing is that it’s just a guitar, and it’s important to take them out once in a while so they don’t become holy relics. They are beautiful instruments and meant to be played and it was really cool for me to be able to play those guitars.

Thom: Well Joe it’s been a real thrill following you all these years and I want to thank you for all the great music and wish you safe travels. I can’t wait to see you in Rochester.

Joe: Rochester! Old School! We’ll see you then and thanks Thom.

We would like to thank Erin Cook and Ryan Romenesko from Jensen Communications for setting up the interview with Joe.