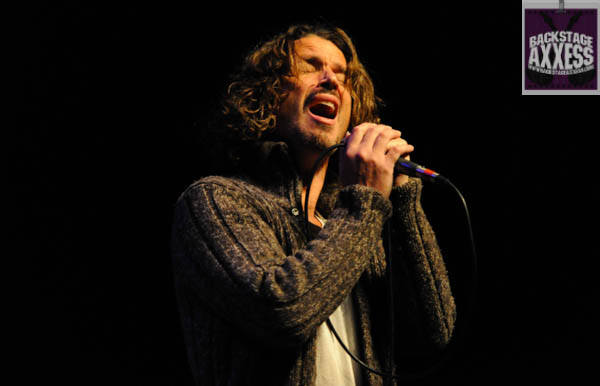 A nearly sold- out crowd was in agreement that it had been way too long since singer/songwriter Chris Cornell made his way to Western New York. He certainly made it up to us by performing a 26- song set consisting of an equal mix of Soundgarden and Audioslave hits, along with some surprise covers and rarities. At whatever point in his career you became an admirer of Cornell, one thing is fact. The man can sing. His vocal range is multi-octave and absolutely mystifying. The superb acoustics of the venue served to further magnify Cornell’s incredibly powerful pipes that change registers with ease and with flawless delivery.

The evening featured a “Storytellers” type setting, as the dimly lit stage consisted only of a simple stool, six acoustic guitars, and a turntable. Yes, a turntable. Via this nifty device, Cornell was able to provide a backdrop of sound to lay his live vocals over; a reverse lip synching, if you will. He only used this technique on a few tunes, which included “Silence the Voices,” and later on “When I’m Down,” where he put down the guitar and slowly paced the stage with just a mic in hand and once again amazed fans with his vocal intensity.

After playing the first few songs, Cornell paused to talk a bit about Buffalo. He apologized for the long wait in getting here and expressed his relief that the weather and the temperature (a mild 62 degrees) was not what he was expecting. He went on to say his wife bundled him up in a winter jacket as he left from their home in NYC earlier in the day.

Not realizing that Buffalo isn’t that far, he didn’t understand why she expected there to be 3 feet of snow swirling around! Moving on, Cornell’s family came up a lot in conversation throughout the night as he often referred to them as a source of songwriting inspiration. “Dandelion,” for example, was written for his daughter while she was still in the womb, in addition, “Scar on the Sky” was penned for his wife, Vicky.

The “Songbook” tour is a solo, acoustic performance that has sold out in several cities the US. It’s worth noting that the set list for these shows is different every night, which is refreshing. Not many artists are willing to change things up to such a degree. With a vast catalog from which to choose, I personally, was thrilled that “Sunshower,” “I Am the Highway,” “As Hope & Promise Fade” and “Getaway Car” were all included in the evening’s repertoire. Early in the show, an audible request for “Sunshower” was made, and eventually granted, much to the pleasure of all in attendance. Cornell explained that the song was the first one written after his departure from Soundgarden; featured on the soundtrack to the movie “Great Expectations.” He expressed his joy over the fact that a “man” shouted out the request, because at the time he released the song he caught a lot of flack for showing his “sensitive” side. But claimed he felt very strongly about creating music that was far different than his work with Soundgarden at the time.

Other high points of the night included a razor sharp, passion filled version of “Fell on Black Days” and an interesting cover of U2’s hit single, “One.” Chris explained he was Googling the lyrics to “One” when he was contemplating covering it. When Metallica’s lyrics appeared for a song bearing the same name, he got a unique idea to blend the two songs together by utilizing the melody of U2’s version, but using the Metallica lyrics. WOW. You have to hear it for yourself to truly appreciate the genius of this hybrid creation.

I could go on and on, as this was by far one of the best performances of my concert-going year. There are few singer/songwriters out there that can consistently deliver important lyrics combined with raw emotion and a pitch perfect sound, but Cornell easily knocks it out of the park. This truth was displayed on tee shirts on sale in the lobby, which confidently stated, in bold lettering, “No One Sings Like You Anymore.” You’d be hard pressed to find anyone in attendance that evening that didn’t unequivocally agree!

Note: This review is dedicated to the memory of local radio personality, “Iron” Mike Benson, who passed away on November 7, from cancer. He was a true fan of music and will be greatly missed.

All Photos by Gus Griesinger

We would like to thank David Wedekindt from UB for the reviewer tickets and Stephanie Williams from Press Here Publicity for the photo pass for the show.