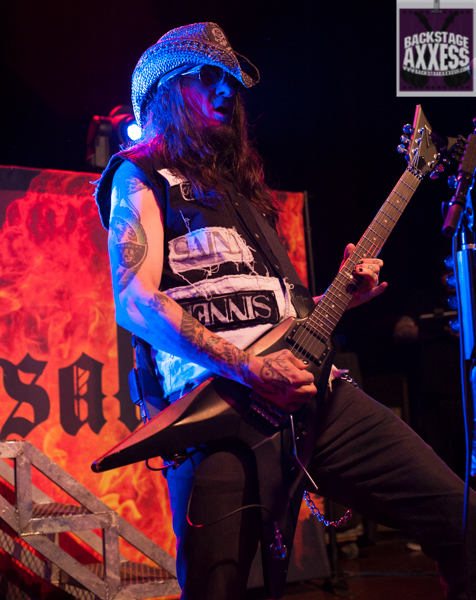 During an interview with front man Bobby Amaru before the show, I was told to expect lots of energy and rock ‘n roll. He and the band made good on that promise the minute they hit the stage opening with, “Black Sheep,” from 2007’s Blood Stained Love Story.

Although the attendance was light, Saliva played an hour’s worth of material from their back catalog of hits, along with a few choice cuts from their newest release, “Rise Up.” “Rise Up,” is the first single from the record and carries forth Saliva’s knack for writing quality rock anthems. In fact, Amaru did thank the Buffalo Bills for choosing it as their theme song for 2014. I can’t confirm that to be true as of yet, but we will wait and see what happens at kick-off come September. “She Can Sure Hide Crazy” was another new song that was lovingly dedicated to all the female, blood sucking vampires, oh and drummer Paul Crosby’s ex-wife. Obviously, you can assume the nature of the lyrics, but the song really rocks, and is one of stand-out tracks from the new record. “In it to Win it,” is another enormous anthem from the CD, however that was not included on the evenings set list. But, to make up for it, they did perform “Survival of the Sickest,” which happens to be my personal favorite.

Well into the set, while fans were busy moshing and generally losing their minds (probably due to the first day of summer-like weather in the northeast) one idiot decided to mouth off near the front of the stage and Amaru did not take kindly to it. He and said heckler traded some words and just as guitarist Wayne Swinny took off his guitar and moved towards the front of the stage to get into it with the dude, the bouncers grabbed the ill-mannered jackass and escorted him out of the venue. On with the show!

Just for fun, the boys threw in a few cover tunes, AC/DC’s “TNT” and Alice in Chains’ “Nutshell.” During TNT, Amaru spotted a young kid in the crowd and invited him up to the stage to sing the chorus, and later Crosby hand delivered him one of his drum sticks, and I like the young fan, thought that was pretty damn cool.

Near the end of the show, as handfuls of unruly crowd surfers were being tossed one by one out the back door, the band finished their set with “Rise Up” and “Your Disease.” As singer Bobby Amaru belted out the lyrics, “I wish I could go back to yesterday,” I couldn’t help but think that very same thought. Because yesterday there were a lot more fans of hard rock music that would have gotten up off their collective asses on a Wednesday night to come and see a killer band like Saliva. Swinny’s solos were blazing, Bobby’s vocals packed a commanding punch and the entire band was firing on all cylinders. My only complaint was that they didn’t play longer.

Photos by Gus Griesinger. We would like to thank Ally Rossomando from Adrenaline PR for the credentials to review the show. Please stay tuned for an exclusive interview with vocalist Bobby Amaru conducted before the show.