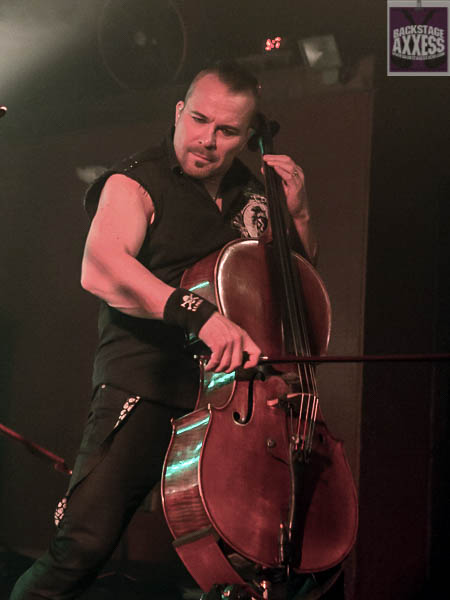 Neo-classical metal was the music of choice for Charlotte metal fans as they gathered at Amos’ Southend to hear some of the hottest cellists in the world with Apocalyptica making a stop in town on their Shadowmaker Tour. Beginning as a Metallica cover band at the world reknowned Sibelius Academy in Helsinki, Finland, Apocalyptica has morphed into a world class metal band. Metal and classical music are similar genres in many ways and the band is able to blend the two styles seamlessly together. Of course, they do this without the traditional metal guitars and bass instead relying on the beautiful cellos of Eicca Toppinen, Paavo Lotjonen and Perttu Kivilaakso aided by the pounding drums of Mikko Siren.

With the recent 20th anniversary of their debut album, “Plays Metallica By Four Cellos,” there was no better way to celebrate than a live show. Kicking off the evening in high gear, the band opened with “Reign of Fear” from their latest album “Shadowmaker.” All three cellists are classically trained and technically proficient and it was amazing to see them perform. The show was not all technical wizardry though as they allowed the beauty and resonance of their instruments to speak for them. Eicca Toppinen thanked the crowd for coming out and supporting the band and the metal community but kept chit chat to a minimum.

The setlist was a combination of original Apocalyptica tunes as well as a nice selection of the Metallica covers that first put them on the map. Drummer Mikko Siren was fierce behind the kit, standing up and urging the audience on and Kivilaakso was exquisite all night most notably during “Perttu Doodle.” Another unique aspect of Apocalyptica is their lack of a steady vocalist instead using numerous guest vocalists over the years. For this tour, they have enlisted Franky Perez to take over vocal duties. It’s a difficult task as many of the band’s singles featured well known rock vocalists like Adam Gontier on “I Don’t Care” and Brent Smith on “Not Strong Enough” but Perez seemed up to the challenge. Although not an official member, he will be on board for the remainder of the tour at least. Highlights of the evening were the wicked rendition of “Master of Puppets” and a brutal version of “Seek and Destroy.” They closed out their set with a spectacular cover of Edvard Grieg’s “In the Hall of the Mountain King.” The band quickly returned for a three song encore including another Metallica cover, “One,” and ending with “Dead Man’s Eyes” off the “Shadowmaker” record.

Whether you’re a fan of metal, classical, or just fantastic music, put Apocalyptica on your must see list when they roll through your town. With all the elegance of a symphony orchestra and all the madness and hair flipping of a raging metal band, this is one band that must be seen and heard live to be fully appreciated.

In the Hall of the Mountain King (Edvard Grieg cover)

We would like to thank Graham Nolan from Eleven Seven Music for the credentials to review the show.