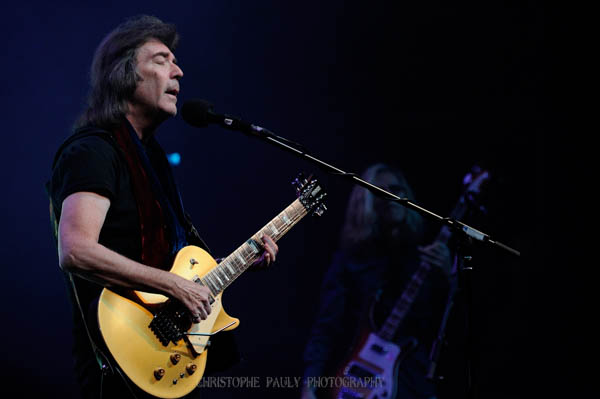 Chords of Progression…Genesis was as innovative as any group both musically and theatrically right from its inception in 1967; the avant-garde quintet of Peter Gabriel, Steve Hackett, Mike Rutherford, Tony Banks and Phil Collins which convened for the 1971 release “Nursery Cryme” embodied some of the Planets most influential and unprecedented individual talent, each member’s contributions critical to the progressive, creative force of their early concept albums. The band captured a long play generation’s imagination, weaving thought provoking lyrical tales with complex composition showered in esoteric arrangements that still mesmerize to this day.

Genesis would record and tour relentlessly for the next five years, releasing epic compositions such as Foxtrot (1972), Selling by the Pound (1973), The Lamb Lies Down on Broadway (1974) which would be Peter Gabriel’s swan song as front man for the Band and A Trick of the Tail (1976) .  With the multi-talented musicians still intact, Genesis would rise from the rubble with the release of “Wind & Wuthering”; this would be the first Album with Phil Collins at the the helm and the final record featuring guitarist Steve Hackett.

While Buffalo has always been a Genesis hotbed for the 1970s era, annually selling out touring tribute acts; fans at Friday Nights Kleinhans Music Hall Concert will witness a veritable spectacle of the Genesis Revisited Tour interwoven with former Genesis guitar virtuoso Steve Hackett and his world class band with the accompaniment of the Buffalo Philharmonic Orchestra (BPO) for a special one night only performance.

BackstageAxxess had the pleasure of catching up with the Rock & Roll Hall of Famer in England while his band was finishing up rehearsals for the Genesis Revisited tour which began earlier this year.

Ross Cat:  Congratulations on your busy 2017! What an amazing way to kick things off  headlining the 2017 Giants of Rock Festival in the U.K., then sailing off to the Cruise to the Edge before kicking off several U.S. Dates. One of them is the very special evening we have here in Buffalo on Fridaynight, March 3, at Kleinhans Music Hall with the BPO.

S.H.: Yes it’s been marvelous thus far; we are very much looking forward to this particular show.  It’s going to be quite the adventure as we haven’t worked together with the BPO but we are up for the challenge. The charts are being drawn up as we speak.

Ross Cat: Describe the challenges of integrating an orchestra with the complex compositions of the Genesis catalog; not to mention your sophisticated solo material.  I know the BPO has been working diligently for months preparing for this seminal moment to share the stage with you.

S.H.: I’ve worked a few times with orchestras, once in Germany and another time in Iceland.  I collaborated with a band called Todmobile that had worked with Jon Anderson doing orchestral versions of some YES material, which I was very impressed with.  Todmobile orchestrated some Genesis material and we did a couple of shows together and it was quite extraordinary.  We are actually working with the BPO with some of the Genesis song charts from those performances. Brand new charts are currently being constructed for my solo material. It certainly will be very interesting to see what the combination of the two produces. The day of the show will actually be the first time we’ll have worked together in person so that in itself will have its challenges as you mentioned.

Ross Cat: Your musical affluence and proficiency as a player has allowed you to navigate with relevancy through the ever changing times and trends of music for nearly half a century. What influences and inspires you to move forward as a writer and performer?

S.H.:  I grew up in an era when albums were just starting to come into their own. Being born before the era of stereo and witnessing its embryonic growth became this huge adventure for me.  There were so many extraordinary things going on in the 1960s. When I started out, I was listening to very basic rock & roll as advanced by the Rolling Stones and I absolutely adored that sound.  At the same time, I was also listening to classical music and I remember thinking to myself these two sounds will never come together. They are very separate, but… what if they did?  Then of course people started to think in terms of well I guess we don’t have to be separatists with these genres of music, we can incorporate the power and urgency of rock with the detailed emotional depth of classical music.

Ross Cat:  That being said, it’s extremely rare for a musician to be revisiting an album that is fervidly celebrated by fans and colleagues alike some forty years later like the Genesis “Wind & Wuthering” album. You will also be able to integrate new material with relevance on the same tour. Fans will get to hear tracks from your upcoming March 24th release “The Night Siren.”

S.H.:  Yes.  It really is a thrill to be able present music that has stood the test of time like “Wind & Wuthering” while still being able to move forward creatively with a sense of purpose.  Creating new material as I have with the songs from new the Album “The Night Siren” along with some of my other solo selections inspires not only me, but my band too and hopefully, the fans that come out to see us.

Ross Cat: Tell us what songs translated best in the live setting and what made you feel those particular compositions encompassed the vibe of the new record to amalgamate with Genesis and other solo selections in the live set?

S.H.: We’ve selected a few tracks from the “The Night Siren” which seem to weave the record together nicely.  The first being “Behind the Smoke.”  It’s relevant in that it marks my ancestry.  My family came from Poland in the late 1800’s, escaping the Pilgrims making it to Portugal and then eventually settling in England.  This particular song speaks to the opportunity of every country to embrace the foreigner, no matter what region we come from. At some point, everyone’s ancestors have been refugees and the most multicultural diversity exists in the United States of America.  We’ll also be performing the instrumental piece “El Nino,”  which refers to being in the eye of the storm along with “In the Skeleton Gallery,” which deals with adolescent issues from my new record.  With this collection of songs, I’ve put together a “United Nations of Music if you will” with musicians from the United States, England, Israel, Palestine, Iceland, and Hungary.  I didn’t set out to make a world music album, it took on a life of its own once I started reaching out to friends.  In the end everyone is connected and the beautiful thing about this process is that no one could tell us we couldn’t collaborate.  Maybe because there’s a border here or a terrorist group there.  Boundaries just don’t exist in music.  It’s all miscegenation.  There are no clans keeping us apart, we do it for the love of music.  If that paves the way for the ideals of constructive globalization, then great! If this minuscule collaborative effort reminds people that may have been at lager heads over the years that we can all sing the same tune or if nothing else, clap in time together.  While I’m excited to present the new material, logistics won’t allow all those guest musicians to tour with us except for a possible guest spot from time to time.

My band, who are all British (under the tutelage of musical director Roger King who is on keyboards), we also have Gary O’Toole (drums/percussion), Rob Townsend (saxes/flutes), Nick Beggs (bass, stick & twelve string), with the exception of Nad Sylvan on vocals who sings the Genesis songs is Swedish/American. They all have been working like crazy at rehearsals all hours under the sun to present the material from “The Night Siren.”  This really is one of the most diverse sets I’ve ever performed and is quite the undertaking.  Especially the orchestral set we are doing in Buffalo.  We’ll commence with an opening set of solo material followed by a short intermission and then we will return to the stage to celebrate the “Wind & Wuthering” era along with some other Genesis gems.

Ross Cat:  While some things change they truly do stay the same.  It’s interesting how time hasn’t changed the concept of “Blood On The Rooftops.”  How appropriate that particular song remains so relevant after recent events since our new President has taken office.  This song is as profound now as it was forty years ago.

S.H.:  So true. When I originally wrote it (as I was the main instigator of that tune), I really didn’t think anyone would like it.  I was writing a verse melody that was an ode to Jimmy Webb.  Phil had a bit of what should have been the chorus except we didn’t end up repeating as the band really wasn’t composing chorus based material at the time.  Being the pre -MTV era, every line we had written and presented to one another was certainly an adventure.  As you mentioned “Blood on the Rooftops” was written with the idea of protest.  In this particular case it was prisoners communicating with blood stained sheets from the rooftops to one another. The Song “Inside & Out,” which we’ll be performing, had a similar declaration. I’ve often said that song should have been included on the “Wind & Wuthering” record.  In that particular song, Phil Collins lyrics spoke of the injustice of a man wrongfully imprisoned so those songs have a common thread in the set.

For me personally, there is an aspect of restitution to be able to play that song alongside the others and say this one is as bejeweled an exhibit as all the rest and we’re just dusting it off and here it is for you.  Both “Blood on the Rooftops” (Hackett,Collins) and “Inside and Out”(Banks/Collins/Steve Hackett/Rutherford) will in fact be in the Genesis Revisited set along with “One from the Vine” (Banks).  Both songs which are epic. We will also be performing “….In that Quiet Earth” (Hackett, Rutherford, Bank, Collins), and “Afterglow” (Banks).  I have to say my band does extraordinary authentic versions of these Genesis classics because the musicians that I work with do actually love those tunes. 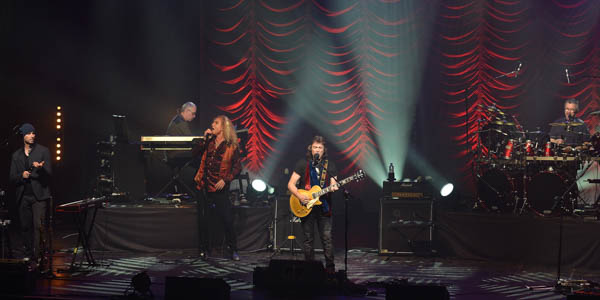 We would like to thank Chip Ruggieri & Hannah Wolfram at Chipster PR along with Michael Montoro from BPO Nation for setting up the interview with Steve.

For more information on purchasing tickets for the show on March 3rd with the BPO, please go to:   BPO show.   Please be sure to visit Steve Hackett for upcoming Genesis Revisited tour dates and information about Steve Hackett’s upcoming worldwide solo release “The Night Siren” on March 24th.