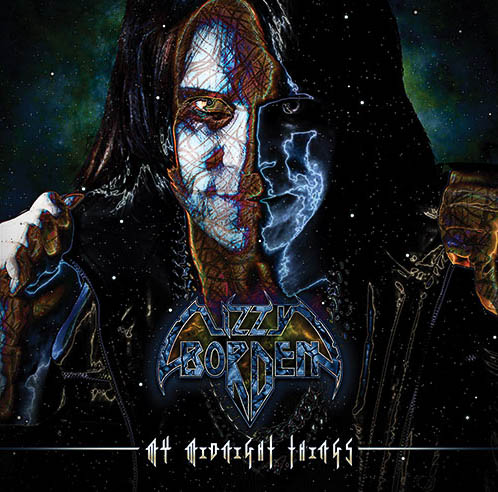 Lizzy Borden has recently released his seventh studio album and first new music in eleven years, “My Midnight Things” via Metal Blade Records.   The record is his first since 2007’s “Appointment With Death” and features ten new songs that run the gamut stylistically from metal and rock to glam and theatrical and a little bit of everything in between.  Hunkering down in his North Hollywood studio by himself to write and record, Borden came through with a plethora of material eventually whittling things down to the ten songs that make up “My Midnight Things.”  He also took a bit of a different approach to the writing process, focusing on lyrical content first and creating music to match.

Borden is a skilled multi-instrumentalist and tackled not only lead vocals but also all the guitar and bass with his brother Joey Scott handling the drums and Marliese Quance Mildenberg laying down the majority of the keyboard tracks.  The title track opens up the record with a driving pace and a rich layered vocal style much like his 1989 “Master of Disguise” album.  Borden possesses an incredible vocal range and the years appear to have been kind as he sounds better than ever.  “Long May They Haunt Us” changes it up with a real 80’s metal feel and a soaring melodic chorus.  Mildenberg’s keyboards add to the incredible layering effect on the album as Borden experiments with different sounds and tones.  The tempo changes of “Run Away With Me” allows the song to build and build to a powerful chorus while “Our Love Is God” kicks things up a notch with a harder, metal beat and shouts of “Wake up!” and “Rise up!”  A reprise of the title track offers a unique touch as a stripped down keyboard driven ballad and the album closer “We Belong to the Shadows” is both powerful and majestic with an almost Broadway style feel .

“My Midnight Things” takes the best of what Lizzy Borden has to offer with a few new twists and turns resulting in an epic album of pure metal grandeur, one that you won’t want to miss.