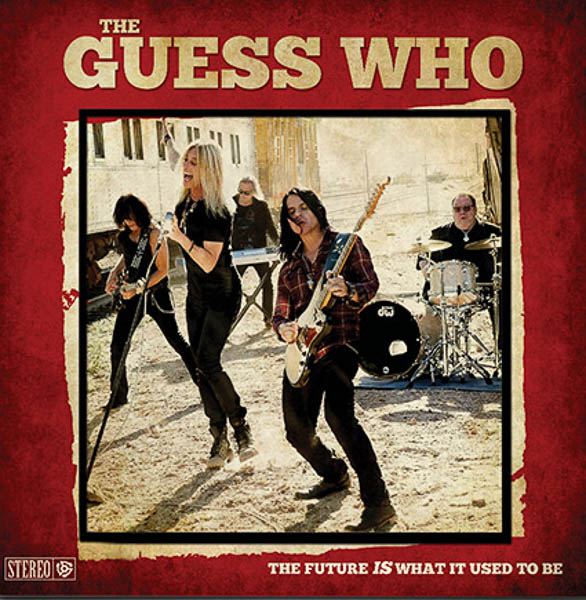 For many classic rock fans, the Canadian rock band The Guess Who is responsible for playing the soundtrack to our lives with iconic rock and roll hit songs like “American Woman” and “These Eyes.”  Although the lineup of the band has changed over the years, their classic sound remains as the band is set to release a brand new album “The Future Is What It Used To Be” on Cleopatra Records.  This new version of The Guess Who  includes original member Garry Peterson on drums, D# on lead vocals, Will E. on guitar, Leonard Shaw on woodwinds and keyboards, and Rudy Sarzo on bass.

“When We Were Young” starts things off, a true throwback to days gone by with an old school chorus and a guest vocal by Tommy Shaw.  D#’s vocals are on point and the band seems to have a natural ease playing together as a cohesive unit.  There’s some ultra cool blues harp and sax on the rocking blues track “In America” while the love song “Give It A Try” goes in another direction with a real reggae feel. The first single “Playin’ On The Radio” is a nostalgic rocker about the passing of time but also a real celebration of rock radio classics.  A highlight is the piano ballad “Haunted, ” a poignant lament that D# wrote after being seated next to original member of The Guess Who Burton Cummings on an airplane and overhearing that Burton had recently lost his mother.  The song then evolved as feelings on the loss of his own mother took hold resulting in this beauty of a song.  Changing things up yet again, the album closes with the upbeat country rock feel of “A Long Day.”

I will admit that I was a bit skeptical at first before I listened to the album and no this is not the original band.  That being said, I was more than pleasantly surprised by what I heard on “The Future Is What It Used To Be.”  The album is a terrific classic rock record that stays true to the original sound of the band but also places the band on a solid path looking forward to the future.  Well done!