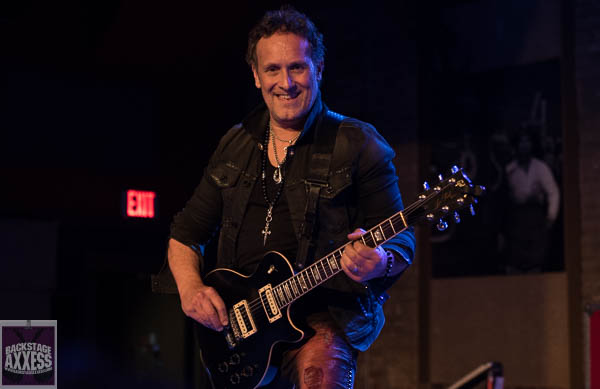 On tour in support of their second full length release called “II,” Last in Line came through the WNY are to play Iron Works this past Sunday night. In 2012, former Ronnie James Dio guitarist Vivian Campbell decided to put together the original band (minus Dio): Vinny Appice on drums, Vivian Campbell on guitar and Jimmy Bain on bass. These were the musicians who played on Dio’s first few releases.  There were joined by Las Vegas native Andrew Freeman on vocals. A few years after the formation, bassist Jimmy Bain passed away unexpectedly. That opened up the door for former Ozzy Osbourne bassist Phil Soussan to join the band.

“II” was the first record to have the full current incarnation of the band so was obviously they were eager to play the new material in a live setting. The band played four songs were off “II” and 3 came off of the first record “Heavy Crown.” The rest of the tracks were songs that highlighted Dio’s solo career.

Taking the stage a little late (band was to start at 9:30 and didn’t take the stage to about 9:55pm), they came out with the powerful “Landslide.”  Freeman may still be relatively unknown to the masses, but for this show he sure made his presence felt. He showed his vocal chops all night and had a great stage presence about him. He easily made a connection to the Buffalo crowd. On the Dio songs, Freeman had a soundalike quality to them. Songs like “Straight Through the Heart” and “Don’t Talk to Strangers” he did a bang-up job on.

This set was all about the music and very little talking in between songs. At one-point, drummer Vinny Appice got out front to introduce the band mid-set. That’s about the extent of any banter between the band. To me, Campbell was the star of the show. He was spot on with his fluid guitar playing and wasn’t flashy at all in his deliverance. The recent Rock and Roll Hal of Famer delivered on multiple levels throughout the show. It was terrific seeing him in a smaller setting playing the music that got him his first true notoriety.

It was great night of music on a Sunday night in Buffalo as Last in Line did a solid performance.

Stand Up and Shout (Dio cover)

Straight Through the Heart (Dio cover)

Year of the Gun

Give Up the Ghost

The Last in Line (Dio cover)

Black Out the Sun

Egypt (The Chains Are On) (Dio cover)

Rainbow in the Dark (Dio cover)

We would like to thank Josh Holtzman from Buffalo Iron Works for the credentials to review the show.