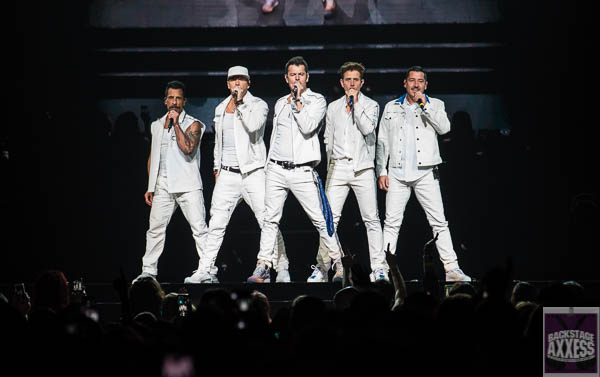 The Mixtape tour spearheaded by the New Kids on the Block, came to the KeyBank Center this past Friday. Along with the NKOTB, this tour included 80’s and early 90’s pop notables Debbie Gibson, Salt-N- Pepa, Tiffany and Naughty by Nature. The arena was at near capacity and the warmth from outside carried inside for a night that took most of the concert attendees back to their youth. Even though NKTOB were the headliners, this was dubbed the Mixtape tour. This meant that all the acts were intertwined through the evening like a true mixtape back in the day.

At about 8;35m, the NKOTB came down on a platform performing “The Way.” The band still consists of all original members Donnie Wahlberg, Joey McIntyre, Danny Wood and brothers Jordan and Jonathan Knight. The 2nd and third songs consisted of a lot of pyro & confetti and choregraphed dance moves that propelled the band throughout the show. “Block Party” featured all the members going out into the audience and standing on various platforms which gave lucky fans an up close and person look at them.  After 8 songs, Tiffany made her way to the front stage where she performed her biggest hit “I Think We Are Alone Now.” She garnered a big response but unfortunately, the same can’t be said for Debbie Gibson who appeared on the circular stage at the back of the arena after Tiffany wrapped up. She did a medley of a few of her most popular songs, but it didn’t keep the energy going until the NKOTB returned for a medley of their own. The next song “Please Don’t Go Girl” featured McIntyre on lead vocals, where he got emotional towards the end of the song. He really gave a heartfelt rendition of the song that he is most known for.

Salt-N-Pepa made their first appearance of the evening and dare I say may have rivaled the NKOTB for the biggest response of the night. Even though the band was without longtime member DJ Spinderella (who they fired earlier this year), they took the energy to a higher level with “None of Your Business” and “Expression.”

The 2nd half of the NKOTB set was led by Wahlberg, who went out into the crowd at one point (actually a row in front of me) and at another point brought up a few young girls to join the band on stage. The Buffalo Bandits Lacrosse Cheerleaders joined the band during a medley which focused on late 80’s and early 90’s songs from Bon Jovi, Bel Biv Devoe and Cyndi Lauper to name a few. Soon enough the band dispersed and then Naughty by Nature came out which kept the flow going with their tunes including their biggest hit “O.P.P.” Debbie Gibson reappeared and did a few more of her most well songs including “Lots in Your Eyes’ where McIntyre helped her sing. Tiffany and Salt-N-Pepa followed before NKOTB closed their set with their first hit :Hangin’ Tough” with a mix of Queen’s “We Will Rock You.” NKOTB were joined for the finale “80’s Baby” by Tiffany, Salt-N-Pepa, Naughty by Nature and Debbie Gibson.

It was a night that brought back the memories of the youth for most. The intertwining of the artists was a noble idea and it was something different. The only complaint I had is that I wish the band shad a backing band instead of singing to a track.

We would like to thank Kevin Kennedy from Pegula Sports Entertainment for his assistance in obtaining the credentials so BackstageAxxess could review the show.